In the 2017 legislative session a bill passed to create a program dedicated to captive breeding of
the Greater sage-grouse. The Wyoming Game and Fish Department (WGFD) was charged with developing regulations for this program.  A program that would allow private companies to gather wild eggs and raise birds for private hunts and for mitigation of Greater sage-grouse. 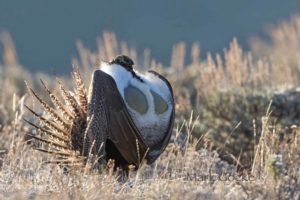 Wyoming Wildlife Federation is against this for a few reasons. It heads down the path of privatizing our wildlife. Gathering wild eggs to raise in captivity for profit is privatizing a public resource. This public resource is for all of us, not just for those who can buy a bird to hunt it. Raising grouse in captivity to off-set the loss of grouse habitat is counter-intuitive.  Where will these pen raised birds go if the habitat is gone. Captive breeding also threatens wild sage grouse in many ways. Captive birds, which scientifically do not breed as well as wild birds, will compete for habitat, without giving the return of successful breeding.  Captive birds released in the wild can carry disease that threatens wild sage grouse.  The whole program is a step backwards in an effort to keep Greater sage-grouse off the Endangered Species list.

The regulations developed by our state wildlife agency were formulated through the help of the Wyoming Sage-Grouse Implementation Team (SGIT) and through public comment. Joy Bannon, WWF Field Director is on the SGIT. WWF provided comments through both channels. Escaped birds, monitoring of egg collection, record keeping of captive breeding methods, the number of permittees, and the financial investment by the agency were highlighted, discussed, and added to the regulations.  These were some of the things we asked for.

While we were not excited that the Wyoming legislature put this burden on the WGFD to develop rules for captve breeding of Greater sage-grouse, the WGFD did their due dillegence. They faced a flood of comments including ours.  Did they addess all our concerns? No. That being said, WGFD did create regulations with clear and thorough language on how to follow through with the captive breeding program, using the best available science. Only time will tell how this plays out, WWF will be watching this effort closely.  It is always tough when politics gets involved with wildlife management.