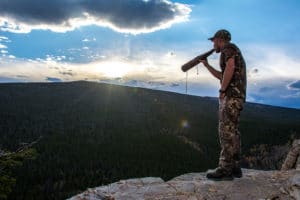 The Select Federal Natural Resource Management Committee of the Wyoming Legislature is considering draft legislation for a constitutional amendment that would set the stage for the transfer of federal lands to state control. In Wyoming there are more than 38 million acres (5%) of the total of 640 million acres of federal lands in the United States, lands for all Americans.

What is WWF doing to prevent our public lands from being stolen?
WWF has been on the front line with this issue. A diverse array of sportsmen and conservation groups all oppose the transfer of federal lands to state control. This was especially evident at the standing room only meeting on Nov. 9th in Riverton held by the full legislative committee. WWF was there to testify and arranged for a wall of camo by sportsmen in the audience.

WWF says such a transfer is not in the best interest of Wyoming. The U.S. Congress would have to do this, but as more western states pass legislation and in Wyoming’s case, attempt to change the state constitution to allow for such a transfer, Congress may feel emboldened to make such a move. This would have grave implications to America’s public lands – for current and future generations.   WWF cannot just sit idle and watch happen, and that’s why we are working hard on this issue and on behalf of our members.

What’s at risk?
The risk is too great. State control of federal lands goes against WWF’s three-pronged mission – healthy wildlife, intact habitats and access to public lands for hunting and fishing. We can’t be sure the state would manage for multiple use or maintain access. The state’s track record; it’s not good. When Wyoming became a state, the federal government granted approximately 4.2 million acres of land to the State of Wyoming to be held in trust and for schools. Nearly 17% of those state lands have been sold off.

Why do these politicians want control?
We believe the motivation by a handful of politicians to do this in Wyoming is purely financial. Nearly $2 billion annually is generated on federal lands from energy and mineral development. Of this, Wyoming receives $1 billion each year…but these politicians who want control of federal lands are largely motivated by those federal dollars. They believe the state should receive the full $2 billion annually. We seriously doubt Congress would want to give up its share of $1 billion generated by natural resources extracted on federal lands, and the lands owned by all Americans.

WWF provided testimony on the constitutional amendment change at the legislative hearing in Riverton and plans to again comment on Dec. 14 at a subcommittee meeting in Cheyenne.

Outdoor tourism dollars should matter!
These politicians need to better consider the tourism dollars generated in Wyoming through outdoor recreation and access to federal lands. WWF, in partnership with the University of Wyoming and Game and Fish, has been conducting studies on the economic impacts of hunting and fishing to the state, on a county-by-county basis. We recently completed Fremont County; $22.5 million was generated in 2015, with 18,000 fishing licenses sold. (Click here for the county studies completed so far).

What about working on the solutions to the issues with federal lands management?
Governor Mead has convened task forces to work to address management issues and concerns. In fact, the No. 2 recommendation by the Governor’s Task Force on Forests calls for the creation of a dedicated fund to financially and technically support place-based collaboration on forest issues.

It has been proven, transfer has no legal merit. . . so why continue?
Another major point is this constitutional amendment has no legal merit. Gov. Matt Mead, in an interview with the Casper Star Tribune, said the transfer of federal public land to the state is legally and financially impractical.

This constitutional amendment is also inconsistent with the recent western attorney’s general report that concludes that there is no legal merit to transfer proposals. The subcommittee that produced this report was chaired by the Wyoming Attorney General, so this could not be more inconsistent with the legal findings of Wyoming itself. The final report was signed off by 11 of the 12 western attorney generals, including Wyoming.

Public comment should sway our politicians!
There has been overwhelming public opposition to the transfer of federal public lands. WWF and the Wyoming Sportsmen Alliance, eight groups, 30,000 members strong, are opposed to such a constitutional amendment under development for the 2017 session.

The strength of our democracy is with public opinion and how it can and should have an effect on how policy is made. Please contact your representatives and senators and ask them to listen to the public and vote “NO” on the transfer of federal lands in Wyoming and the constitutional amendment allowing for this to happen.