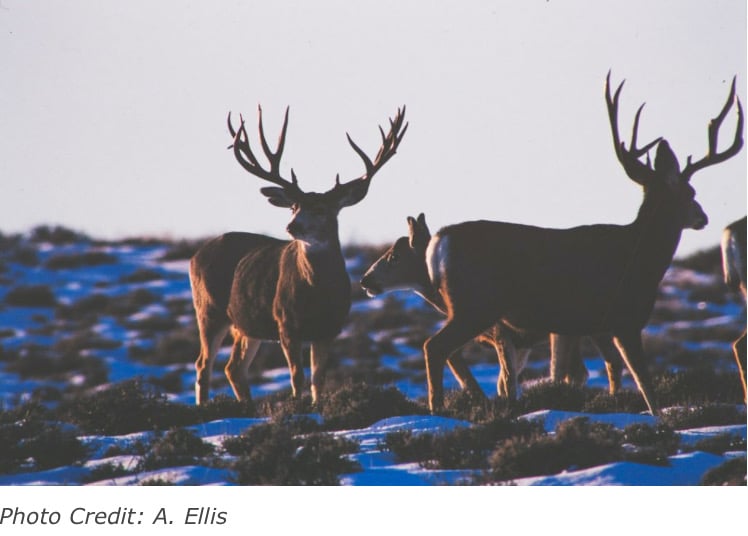 Cover photo of Cal, a legendary Wyoming Range mule deer from the early 90’s. Photo taken by A. Ellis and provided by the Winter Range Foundation.

I was just a small kid when my father took his first wildlife biologist job with the Wyoming Game and Fish Department in Kemmerer, WY – the year was 1989. He was the biologist there until 2012, and a big part of his job was to manage the famous Wyoming Range mule deer herd. Throughout his career, he devoted much of his time to improving habitat and doing whatever he could to help this herd in positive ways. There were many ups and downs, angry sportsmen, headaches and head-scratching, and stress when it came to the management of this herd. 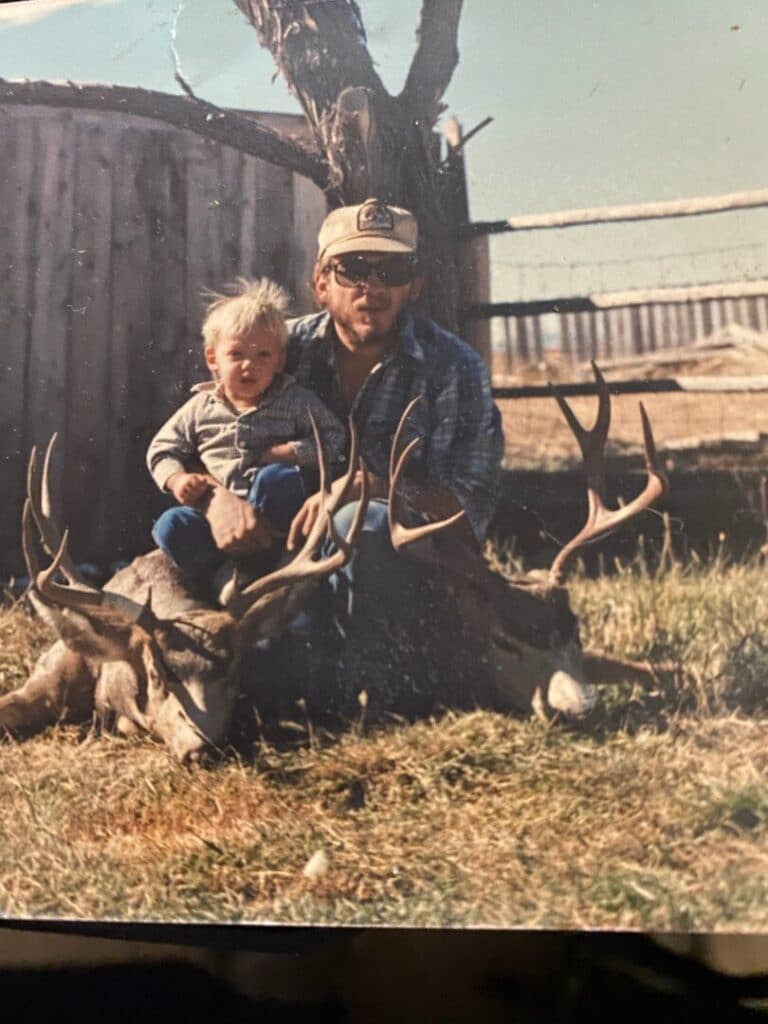 The author, Sam with his father in the late 80’s when hunters could hold two licenses for mule deer bucks.

Watching my father and his colleagues work hard, witnessing how much they cared about the herds they managed, and their love for hunting are all the reasons why I have devoted my life to being a wildlife biologist. When he first took over as the biologist in Kemmerer, we were in the heyday of mule deer in the Wyoming Range.

Starting with 1976, there were only a few more than 20,000 deer counted during annual classifications. The herd steadily grew until 1983-1984 with numbers up to around 45,000 and then a steep decline occurred that winter with the number receding back to around 30,000 animals. This die-off can be attributed mostly to a terrible winter.

Wyoming Range Mule Deer Population Over Time. Currently, WGFD estimates around 30,000 deer in the population with an objective of 40,000 deer, set in 2016 (after this diagram was created).

My folks told stories about how they had to follow the snow plow into town to get to the hospital the night I was born. That winter they were snowed into their house in Laramie for several days at a time. After that winter, there was a period of relatively mild winters when the population rebounded and rebounded quickly.

During classifications after the hunting season in 1991, nearly 60,000 mule deer were counted. That is undeniably a lot of mule deer. Following the 1991 and 1992 winters, there were projected to be 25,000 deer in 1993. This deer herd was essentially cut in half in two years.

What caused this loss of nearly half of the mule deer herd?

There is no easy answer to why nearly half the mule deer herd died so quickly because there are a lot of contributing factors, with the largest being a deer herd over its habitat carrying capacity. With the surplus of deer in this herd, there were very liberal hunting seasons put into place, and hunters took advantage. During the ’91 and ’92 seasons, there were between 12,000 and 13,000 hunters. That was an all-time high in hunters out in the field for these areas. In contrast, there have been just over 5,000 hunters afield in the same areas since 2008 – a number that has stayed relatively consistent the last 14 years.

What really is crazy to me when you look back at this old harvest data is that in 1993 the total harvest plummeted to under 2,000 animals, with over 8,000 hunters in the field. These harvest numbers stayed pretty consistent for the next 5 years until folks saw a slight jump in harvest numbers in 1998.

Photo of Cal, a legendary Wyoming Range mule deer from the early 90’s. Photo taken by A. Ellis and provided by the Winter Range Foundation.

The one thing that nobody can predict when you live in Western Wyoming or Wyoming, in general, is the kind of winter you are going to have. The winter of ’92-93 was abnormally bad, and it is seen in the old classification data. We already know that this herd was at an all-time high in ’91 and just a few years later almost back down to an all-time low, liberal hunting seasons backed with one of the worst winters in recent history is certainly a reason for this crash but not the only one.

The Rebound After Bad Winter

Let’s get back to the numbers and look at fawn survival. Without good fawn recruitment, you cannot have a sustainable mule deer population. During the years 1988 through 1990 during winter classifications, biologists counted nearly 90 fawns per 100 does. I am going to write that again. There were 90 fawns per 100 does in the Wyoming Range herd from 1988 to 1990.

Even if the long-term population is stable, the Wyoming Range deer herd is always fluctuating from year to year. The harsh winter of 2016-17 brought the population down from nearly its objective at 38,000 deer to its current state at around 30,000, but with good fawn recruitment, we can expect to see this herd responding positively in the near future. Also, as I mentioned, hunter participation has plateaued since 2008 at less than half of the hunters running around the Wyoming Range 30 years ago.

What can we do to help this herd get back to its management objective? First, we can do habitat improvements. These improvements look like the fence modifications and removals the Federation and partners like the Winter Range Foundation, WGFD, and others have facilitated in the past. We also are working to designate the Wyoming Range Migration Corridor through Governor Gordon’s designation process, so there can be more resources to conserve this crucial habitat.

Next, we can reduce collisions on our roadways with better overpasses, underpasses, and fence infrastructure. The Federation works on the Wyoming Wildlife and Roadways Implementation Team (WWRIT) and supports creative funding solutions for wildlife crossings, as was the case with the new Wyoming conservation license plates. Lastly, we can always pray for some milder winters with the right moisture to grow good winter range. It’s a delicate balance, but a balance that these deer have made a living in for eons.