Hickerson is the 2017 recipient of the Jespersen Award! 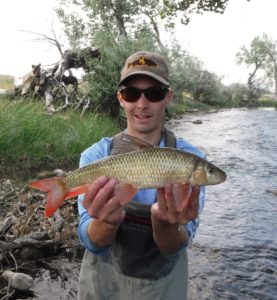 UW PROJECT: Hornyhead chub in Wyoming have a highly limited distribution and are classified as a Species of Greatest Conservation Need by the Wyoming Game and Fish Department. Western populations of Hornyhead Chub are isolated glacial relicts that are disjunct from the main distribution of the species in the midwestern United States. Glacial relict populations of Hornyhead Chub historically occurred in Wyoming, Colorado, western Kansas, and southwestern Nebraska, but all populations are thought to be extirpated except for two in the Laramie River drainage, Wyoming. Causes for population declines include: habitat degradation and fragmentation from irrigation diversions, land use practices that increase stream siltation, and predation by and competition with non-native fishes.

We are evaluating potential reintroduction and new refugia sites in the North Platte drainage on the basis of habitat availability and fish community composition in 2016 and 2017.  During this same timeframe we evaluated the effect of non-native piscivores on Hornyhead Chub populations in the Laramie River. The project outcome is expected to benefit managers by ensuring limited resources for Hornyhead Chub reintroduction are spent in areas where probability of establishment success is high. Ultimately this research will help to conserve unique populations of this glacial relict lineage in Wyoming.