Herd of winter does in Big Sandy country

The migration route for mule deer from the Red Desert to the Hoback not only encompasses more than 100 miles, it also has over 100 miles of not-so-friendly wildlife fence within its boundaries. WWF and a vast array of partners, especially landowners, have made significant progress in replacing or modifying such fences. 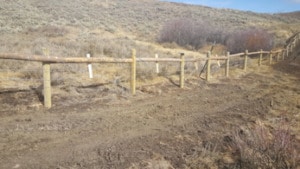 WWF and its partners have applied for additional WWNRT funding to replace/modify an additional 30 miles of fence on three ranches over the next 2-3 years.  Partnerships are essential. There are at least 13 NGO’s and 7 regional offices representing 3 agencies providing support on several fronts. And then there are the willing landowners, the critical component of this program.

This wildlife-friendly fence effort not only vividly illustrates the value of wildlife to Wyomingites, but it demonstrates our willingness to be team players in accomplishing seemingly formidable tasks.