Wyoming Wildlife Federation Conservation Ambassadors are hunters, anglers, and outdoor recreationists of all backgrounds and experience levels. They are biologists, they run businesses, and they raise their families here in Wyoming. Our Ambassadors are a diverse group of forward-thinking, proactive folks from throughout the state, concerned with elevating the conservation narrative and challenging long-held stereotypes about what it means to be a conservationist. For more details, check out our Conservation Ambassador Program. Without further ado, here’s our latest lineup of fantastic, dedicated Ambassadors: 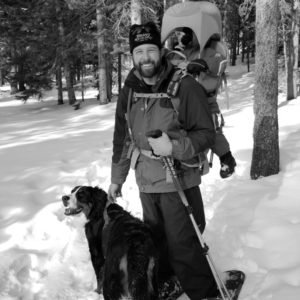 Chris is a husband, a father, and an outdoor enthusiast. Whether it’s hunting, fishing, camping, hiking, canoeing, running, snowshoeing, etc., he loves getting out of doors with his family to connect with the natural world. Prior to moving to Casper, Wyoming, Chris grew up in the tiny Oregon Trail town of Guernsey, Wyoming. Living, at the edge of town – on the banks of the North Platte River – afforded him the unique opportunity of utilizing the river’s resources at a moments notice. In the summer, much of his time was spent floating, fishing, catching crawdads, or just swimming in the cold, swift currents. In the fall when the river was low, Chris would step across the river where he would enjoy building forts, miles of hiking, rabbit and squirrel hunting and anything else a young kid could dream of. In the years since Chris has spent time in the elk and grizzly inhabited Absarokas, called to migrating waterfowl in the Bighorn Basin, and flushed pheasants in the southeastern farmlands along the Platte. He enjoys glassing gray mule deer in the rolling sage of the Wyoming center and rutting white-tailed deer of the northeastern Black Hills. As he states, “Wyoming has so much to be passionate about. I believe a privileged life spent outside has given me an appreciation for the natural world and an obligation to advocate for its existence for my family and generations to come.” 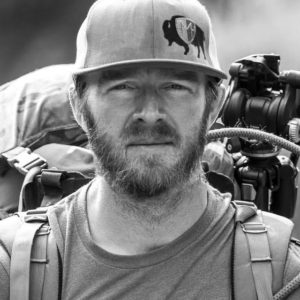 Chris was born and raised in northwestern Wyoming, where he was fortunate enough to spend his childhood in the deep wilderness surrounding the greater Yellowstone area. The environment in which he was raised afforded him many intimate encounters with wildlife and the spaces they inhabit. This upbringing solidified his passion to continue to understand the natural world and the threats to these systems. In 2007 he completed his degree in Wildlife Biology and has since worked as a backcountry hunting guide, wilderness horse packer, and professional wildlife biologist. His newest venture is co-hosting a podcast with a great group of guys that are passionate about conservation and science-based discussion. The WWF is a perfect fit for Christopher as he is a fifth-generation Wyomingite and he wants to guarantee that future generations are fortunate enough to have the opportunity to experience truly wild and healthy landscapes like those that came before him. 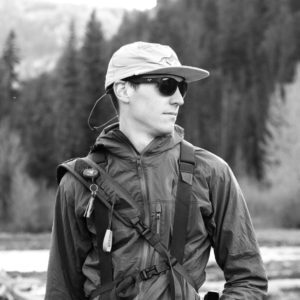 Christian is an avid outdoorsman and adventurist. Born and raised in the prairie lands of Western South Dakota, he spent many a summer out on his family’s ranch hunting, hiking, and exploring the lands surrounding the Black Hills. Christian now lives in Cody, Wyoming, where he manages an outdoor retail shop. He has a passion for community involvement and helping people get outdoors to enjoy public lands. He graduated from Northwest College with a degree in business administration and outdoor education and has extensive experience in the outdoor retail industry.
When he’s not in the shop, Christian is typically spending time in the great outdoors with his wife, Megan, and dog, Kaia. They love to hike, climb, backpack, run, ski, hunt, etc. while photographing their adventures –– and as long as the weather in Wyoming holds up, you can bet your bottom dollar they’re outside exploring. 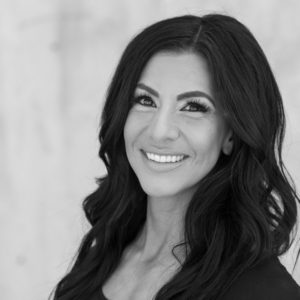 Codee grew up in Rock Springs, Wyoming, where both of her parents were teachers growing up. Her mother Jean and father Harvey were very active people who were always active with many different sports indoor and outdoors. They enjoyed downhill skiing, cross country skiing, hiking, hunting, ballet productions, tria-thalons, and more. One of Codee’s fondest memories was when her dad would go hunting and come back with an animal that the family would process together. Looking back, Codee realizes that not only was her family saving an enormous amount of money on meat but they were spending quality time as a family and also eating healthy, lean meat that tasted amazing! They mostly hunted elk and antelope. When Codee was fourteen years old she was able to go on her first hunt in the Green River Lakes for cow elk. Up until then, Codee had worked hard at many sporting events and recreational activities but never experienced hard work like this. She was able to harvest a cow elk on that hunt that would change her forever.

Codee’s appreciation of the hard work and the knowledge that her parents both displayed growing up with hunting, processing meat, and cooking the meat has led her to a passion for mentoring others and making sure our finest resources are respected and valued. It has catapulted her into wanting to help others who may not otherwise be afforded the opportunity to have a mentor for hunting or just enjoying the outdoors. She also has been able to pass down the knowledge she was given to her children.

She is involved in The Wyoming Women’s Antelope Hunt and Hunting with Heroes of Wyoming. She recently collaborated with The Bowhunters of Wyoming, which her father is president of, and helped bring disabled veterans from Florida to do an amazing antelope hunt in the Red Desert. Codee enjoys her involvement with Wyoming Wildlife Federation (WWF) as an ambassador for all of those interested in beautiful Wyoming outdoors whether it be advising on fishing holes, hiking trails, visiting local legislators, or helping fundraise for the many great projects WWF is involved with.

“The outdoors brings such a raw emotion out in people that they sometimes never have discovered, I absolutely love seeing that come out in others and then them returning to it over and over again.” -Codee 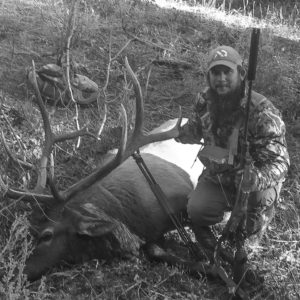 Cody grew up on the family ranch in NW South Dakota, hunting and fishing private land, not fully understanding public lands until his family ranch sold and hunting leases started grabbing hold on the neighboring ranches. 2003 was his rookie season fighting wildland fires for the US Forest Service, which eventually lead him to California for 3 years, until moving to SW Wyoming in 2008. Where he is currently the engine captain for the US forest service. All of a sudden, Cody had access to hunt, fish and explore millions of acres of public lands, lands he had little understanding of in regards to their management or on the ground conservation efforts. Some of the first people he met in Wyoming introduced him to the ideas of public lands, conservation, and wildlife advocacy – things that would later become passions. He attributes much to the Wyoming Wildlife Federation as the organization has allowed him to enter a new world of conservation advocacy, ultimately looking to help others do the same. Some of his interests include being outdoors with his wife, his two beautiful daughters, and his two pups – chasing elk and mule deer, recruiting and educating new hunters and cooking the wild game he has harvested. 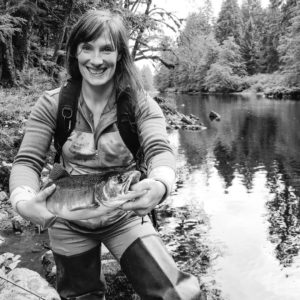 Kayla was born and raised in the farmlands of western Oklahoma. Free time was often spent digging up salt crystals or spotting wood ducks at the local wildlife refuge. As she got older, her father taught her how to hunt and fish while her mother taught her how to grow a garden and preserve their harvest. This built the base for her goal to self-sustain. Now she makes her home under the Big Horn Mountains where thousands of public acres give her access to wild game and foraging for berries or mushrooms. A beautiful and rich land that gives her the ability to raise and teach her daughter the same lessons once taught by her parents.

12 years have flown by since her initial decision to move to Wyoming. This was mainly influenced by her daughter and the desire to provide a healthy environment that would allow them to be outside as much as possible. They spend as many evenings and weekends out hiking trails, identifying local vegetation, and learning to improve Kayla hunting/fishing skills. While her daughter already fly fishes, this will be her first year to harvest a hunt and put her skeet skills to use, passing down a family tradition.

What really captivated Kayla to remain in Wyoming was the care residents put into their land and communities. That was something she wanted to be a part of and eventually help improve. Now she sees the need to speak up and teach others the importance of being a hunter who pushes for conservation and sustainability. To pick up the trash along a hike or hunt and fight for public access. To educate children on the importance of respecting and taking care of the land as well as helping others learn how to be self-sustaining. 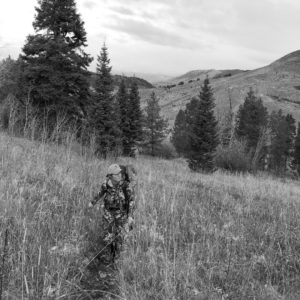 Stina is a Norwegian transplant, who’s been in Wyoming for a couple of decades. Although the plan was to only stay for a few months, it didn’t take long for her to fall in love with the state and decide to make it her home.
She spent a few years skiing and snowboarding in the winter and climbing and riding bikes in the summer, all over the state and the west. All the while, she kept feeling like something was … missing. Then she started tagging along when her husband went fishing and hunting. Shortly after, she stole one of his fishing rods and then forced him to let her field dress most of his elk that fall. That’s when Stina realized that this was the connection she had been missing. Suddenly, she was not just in nature, she was a part of my environment. No longer just a spectator, but a participant.
Now, she has a couple fishing rods of her own, a hunting rifle and a compound bow, and she spends large portions of the year with one in hand. Hunting season is her favorite part of the year. She cherishes those moments of sitting perfectly still up on a mountain at first light, hearing, seeing, and feeling the transition from night to day. Eventually an elk will bugle and it’s game on.
Hunting is what solidified for her the importance of public lands and conservation. As she says, “It’s no longer just about maintaining the relatively small areas we use for recreation; hunters need to consider entire habitats that sometimes stretch across states to support their quarry.” It’s a complicated topic with a lot of interest groups, and she is prepared to work hard to make the voices of sportswomen heard in the debate.

Our ambassadors are extensions of the organization, they are out in Wyoming communities and looking to connect with others who are passionate about conservation, wildlife, wildlands, and our outdoor heritage. Look them up, reach out, and help us build the conservation collective in Wyoming.

If you are interested in becoming an ambassador or know someone who fits the description, contact us directly: