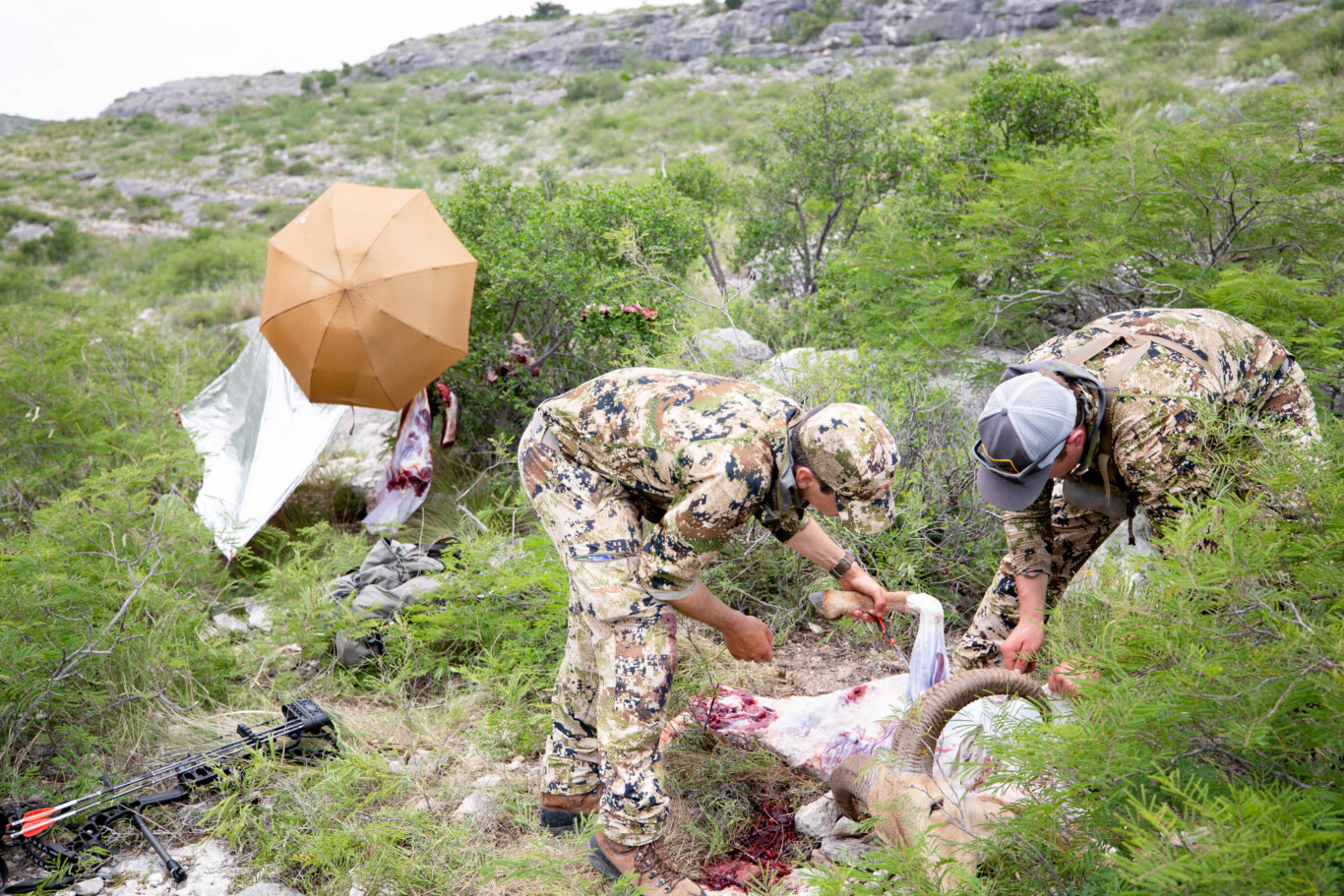 Hunters For The Hungry NewsNewsOutreach And Local Engagement News

Taking Care of Game Meat in the Heat

Born and raised hunting in Texas, 80-degree days in November are not a rare occurrence down here. During early season hunts like Wyoming’s archery season, hunting September antelope, or whenever the mercury rises, it’s critical to be cautious with meat spoilage. After all, you’ve likely spent far more money on your hunting trip than a trip to the grocery store after you add in gear, travel, time, and effort – the last thing you want is for that precious, lean, organic, free-range, cage-free, hormone-free meat to spoil. So here are a few tips and tricks to help you beat the heat with your meat.

Expect to notch the tag on your dream animal and prepare your equipment and game plan accordingly. Whether you are bowhunting antelope in August in Wyoming, or whitetails with a rifle in Texas in November – have a plan for when you kill that animal. Know your limits – know how far you can hike with an 80-pound pack. Know where the closest meat processor is or have a cooler in your truck if you plan to process the meat yourself. Run through your equipment – bring your game bags and have the cooler chilled at the truck. 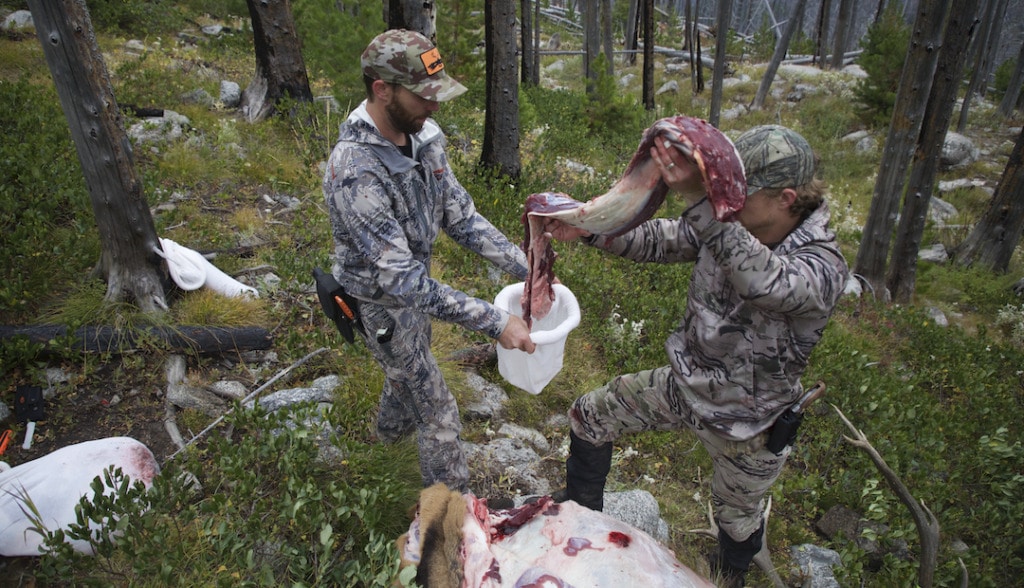 If you are hunting with a buddy, talk through the different scenarios for packing out. If you are hunting solo, be prepared to send a message asking for help packing out or have a plan on how you are going to shuttle your meat alone. Find a shaded area at camp to build your meat pole if you plan to pack the meat out over the span of a few days. This will not only buy you time but will prevent predators from robbing your precious cargo.

I prefer to debone the meat in the field for several reasons – it allows heat to escape and saves weight for the pack out. If I am hunting in an area without many trees, I always bring paracord to hang meat and an emergency blanket for shade. Some folks prefer packing out meat with the bone-in for more structure in their pack. While it works, it is extremely helpful to hang the meat in a shaded area to allow for convective heat loss.

Avoid setting the meat on the ground. You want as much of that surface area open to allow heat to escape. The paracord will allow you to hang the meat from just about anything while you continue butchering in the field. Do not forget direct sunlight is your enemy. If you can drag the animal to shade, take advantage of that. If not, find shade nearby to stash the meat as you work through the quartering process. Good game bags are a critical piece of equipment at this point, as well. They not only allow airflow but also make it easier to suspend meat from a tree. I really like the Argali reusable game bags – they are rigid but allow for plenty of airflow. Avoid using trash bags during early season hunts since they restrict airflow. 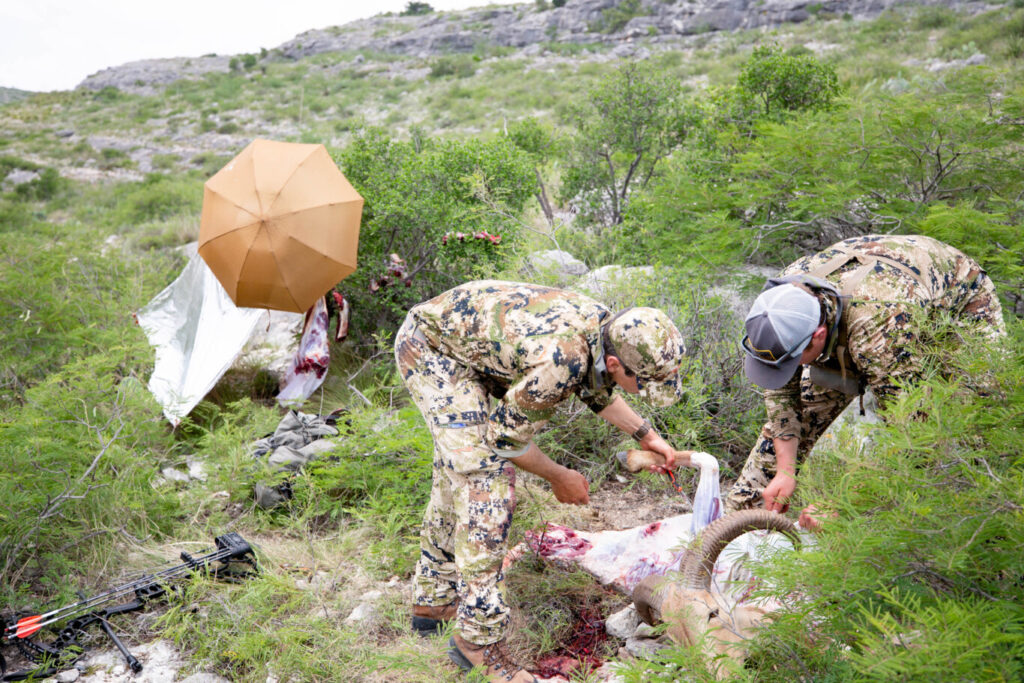 Butchering an Aoudad in the desert of West Texas.
Photo | Sloane Brown

Keep your meat dry and cool. Before departing on a hunt, I prep my cooler by using a “sacrificial” bag of ice to chill the inside of the cooler. This will give substantially more time, and also make your cooler much more efficient when it comes time to adding meat.

On the morning of the hunt, I dump out the melted ice and replace it with YETI Ice or frozen gallon jugs filled with water. The meat needs to stay dry, so avoid placing the meat in a cooler with melted ice or standing water in the bottom of the cooler. Naturally, when the meat comes in direct contact with ice, it will cause the ice to melt because of the temperature difference. Contact with water can cause bacteria to grow on the meat, thus spoiling all your hard work before you get a chance to enjoy it. Therefore, I prefer to contain my ice. 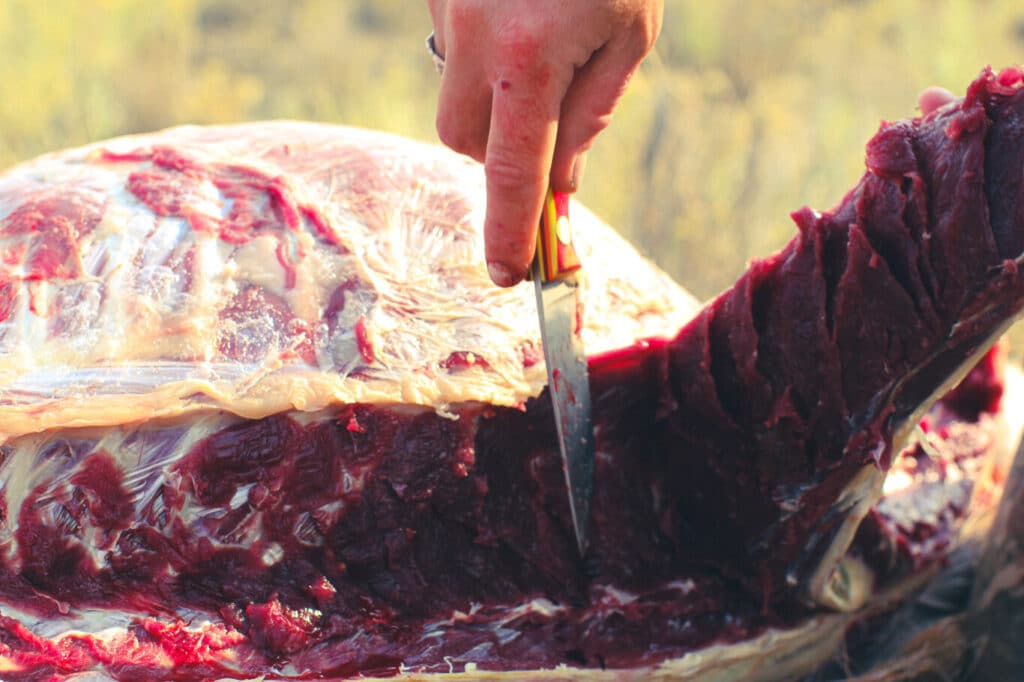 I use YETI Tundra coolers. Not only do they sign my paychecks, but they are also a fantastic company that supports wildlife conservation. Any cooler will do the job, but it certainly helps if you pre-chill the cooler. I have also used a mixture of dry ice and “wet” ice on a West Texas desert aoudad hunt.

Be careful. When dry ice and water mix, gas is released and causes pressure to build inside the cooler. I can only speak for YETI here, but our coolers use an “L” shaped gasket which allows internal pressure to escape the cooler. Be sure to check the gasket on your cooler before adding dry ice– it can combust if there is not an escape valve.

You’ve prepared in every other way for your big hunt this fall, so always have your escape route planned, and be prepared to come out heavier than you went in. There’s no worse feeling than losing meat to spoilage. Plus, we can all agree there is no better feeling than biting into a medium-rare steak, and knowing EXACTLY where that meat came from. 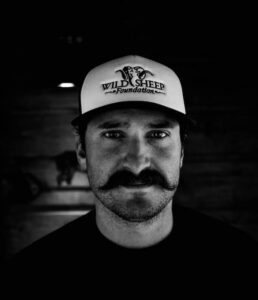 Sloane Brown is based in Austin, TX where he works as the YETI Hunting Specialist. As a result of his work and passion as a hunter, Sloane Brown spends a ton of time afield hunting from chasing Audad in the West Texas desert to elk the mountains of Montana. He knows a thing or two about meat care.