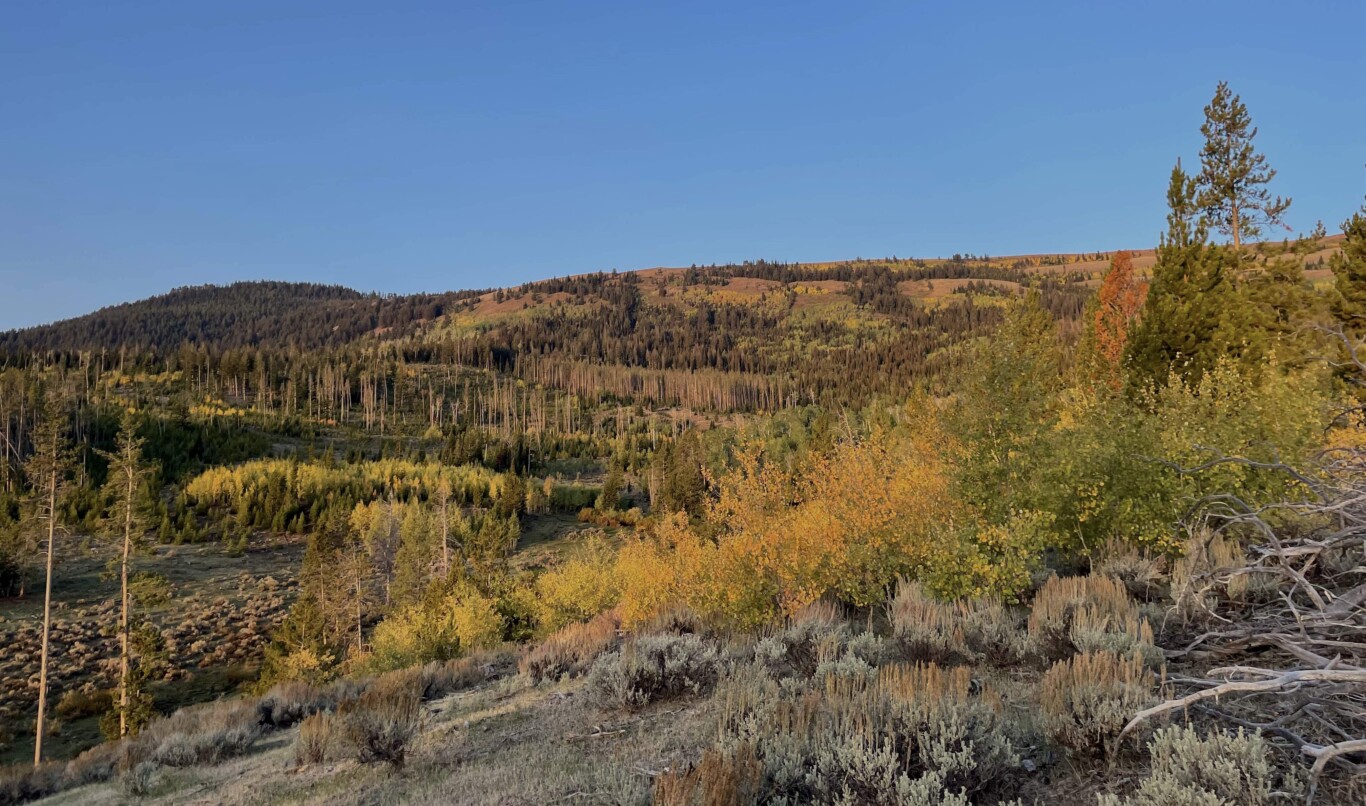 In 2020, the Wyoming Wildlife Federation’s Sam Lockwood opened his annual hunting camp in the Wyoming Range for five U.S. military veterans. The goal of the hunting experience was to share the incredible wildlife and wild places of Western Wyoming with those who have served their country so that others may live a full life in the land of the free and the home oLarry Born Packing Out Elkf the brave.

These are just two short stories from those who found respite and a closer connection with nature on this hunt in the forests of Wyoming.

As I contemplated my pending medical retirement from the US Army in December 2019, I wondered how other veterans had dealt with the stress of the impending changes to their livelihood. Most of us veterans have only known military life for the 10, 20, or even 30 years prior to our retirement. We view the civilian world as a strange and uncomfortable place.

Will the ghost that we silently carry with us allow us to provide for our family in this world? What happens when they come out of the service? How are civilians and employers going to react as we transition?

I wanted to escape my own thoughts and needed an activity to keep me busy. Every time I hunt, I seem to forget the stresses of life while in the mountains. Recognizing this, I thought hunting was a good place to start. In my research, I stumbled into Hunting with Heroes. I really liked their program and called their founder, Dan. Little did I know, this first step changed my life in a very positive way.

Dan walked me thru the process of how Wyoming helps disabled Veteran hunters get donated licenses and get afield. Seeing how easy the state and Hunting With Heroes made it, I spread the word and before I knew it there were 5 of us planning a Veterans hunt in Wyoming. We represented each service and all of us had our own personal disability challenges we brought to the table. I started making phone calls to folks listed on the G&F website trying to narrow down an entire state to an area where all of us were capable of going. After several calls to some very helpful Biologists and Game Wardens, I was fortunate enough to meet Wyoming Wildlife Federation’s Sam Lockwood.

Unbeknownst to me, I was talking to a guy who would help shape several new lifelong friendships. Fast forward 9 months, several Zoom meetings, and hours spent talking on the phone, five veterans packed their bags and geared up to take on the mountains of the Wyoming Range.

Anxiety was high and nervous tensions abounded but after five minutes of arriving at our location, it was like we were talking to folks we had known our entire lives. This unbelievable welcoming set the tone for the next ten days in the Bridger-Teton National Forest. Those were ten great days of not worrying about fitting in or the concerns of transitioning to civilian life. 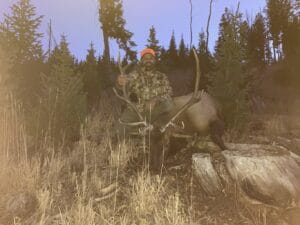 “My muscles ached, my lungs burned, sweat poured, and a few big game tags were notched.” The author with his 2020 bull elk.

My muscles ached, my lungs burned, sweat poured, and a few big game tags were notched. Conversations around a wall tent filled the air in a star-filled sky, tears were shed and laughs were had. Some laughed and smiled so hard their cheeks hurt. The goal of forgetting the negative thoughts that plagued me 9 months prior had come true. There is so much more to this story that just will not fit into this short page – much of the story one simply cannot put into words.

I get thanked for my service quite a bit, but I cannot thank Dan Currah and Sam Lockwood enough for helping me and helping others during our elk hunt. I encourage anyone reading this to consider helping other disabled Vets get up into the mountains whether it be thru a donation or opening up your camp to a stranger.

You never know when you will make a new lifelong friend and help someone escape it all.

When the idea of a hunt for a group of us veterans first floated around, I was intrigued. After some preliminary talks, things started to get firmed up. The group would include me, my best friend John, another fellow I knew previously named Cush, and Tony and Derek from Michigan whom I only knew through e-communications. Four out of the five of us ended up benefitting incredibly from Wyoming’s very generous Veteran’s benefits related to hunting. First, we were recipients of tags generously donated by various Wyoming hunters. Secondly, Cush, Tony, and I are all 100% VA disabled and are allowed to hunt 5 days early.

Zoom was where I first met Sam Lockwood of the Wyoming Wildlife Federation who would be the glue that held the whole operation together. We talked about menus and food, logistics of who had how much time off to be in camp, travel plans, and what was being seen in and around the area we would be hunting.

The first evening of the hunt, I went out on my first uneventful sit. Still very confident, I hit the sack that evening with a plan made to head out to a known hotspot in the morning with Sam. The morning was misty and cool. After a hike across a creek and through some trees, all of a sudden there were elk. We tried to get as close as possible for a shot. The shot that was set up was one I should have made on a mature bull, but I rushed and did not have my breathing under control. Unfortunately, I botched my shot. I felt as low as I ever have while hunting.

I was feeling battered and sunburnt but took solace in the fact that John had taken a bull a few days later. The evening after he took the bull we were treated to a fine meal by the incredibly gracious landowner, Mrs. McGinnis, who allowed us to camp on her land just outside the national forest where we hunted. We were told about the ranch’s history and operations and the family. She finished up the evening by telling us that she would be cooking us biscuits and gravy for brunch the next morning. My soul perked up as that is my all-time favorite meal. Sleep came easier that night even with the wind.

The next late morning found me gorging on the breakfast of my childhood in the warmth of a wood cookstove. With a renewed sense of purpose, I was, at the very least, going to give every measure I had to chase elk. That evening I chose to go as high into the old national forest clearcut as I could. The climb was long for me as the week had taken its toll on my body. I have service-related arthritis down the entire left side of my body and it was slowing me down.

Finally, after an hour of climbing, I found the spot I wanted high in the clearcut with a great stump to perch on. I sat thinking about the week, my life at home, and the real possibility of leaving without an elk. I felt pretty settled about the whole combination. 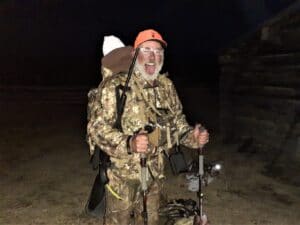 Vet, Larry Born, packing out his 2020 cow elk he took in the Wyoming Range.

About an hour from dark movement caught my eye. In a small opening at the bottom of the clearcut, a cow crossed and stopped so that all I could see was her rear. I looked around to try and find a way to position for a shot but a stand of trees blocked my only move. After about five minutes, she eased off into the trees. I kept my gun up on the shooting sticks but relaxed a bit. The sun was dropping behind the hills at this point when low and behold, she showed herself again. Only this time she stopped broadside in the opening. I was ready quickly and sent the 180gr Trophy Bonded Tip from my Savage on its way. It landed with a thump. She staggered and walked up the hill toward me stopping broadside facing the other way. My second shot anchored her to the spot and she passed quickly.

I got on the radio to tell the others, giddy like a schoolchild at my success. Sam was the closest to me and said he was on his way to help. About the time Sam arrived, John hit me on the radio to confirm the shot was mine. I told him it was and he said he was coming to help. We were finished quartering and bagging the meat by the time he arrived.

We packed up the whole elk between the three of us and headed down to camp. About halfway back to camp dark had set in but none of us cared. Loaded down with heavy weight or not, we were having a great time. 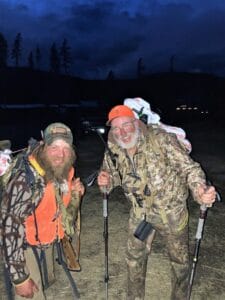 WWF’s Sam Lockwood with vet, Larry Born upon arriving to camp with their heavy load of meat.

Back at camp I put the meat in the hanging shed and met up with Chris, the local game warden. He took my tag to log my success into his records and congratulated me. The night was finished with liquid celebration and prayers of thanksgiving for the bounty of God and the sacrifice of his creature.

The next day was one of relaxation and recuperation, along with a good old-fashioned storytelling session around the woodpile. John and I left the day after. We are incredibly thankful, not only for the animals but for the time in that special place with wonderful people.

Wyoming is much more than just a square on the map.