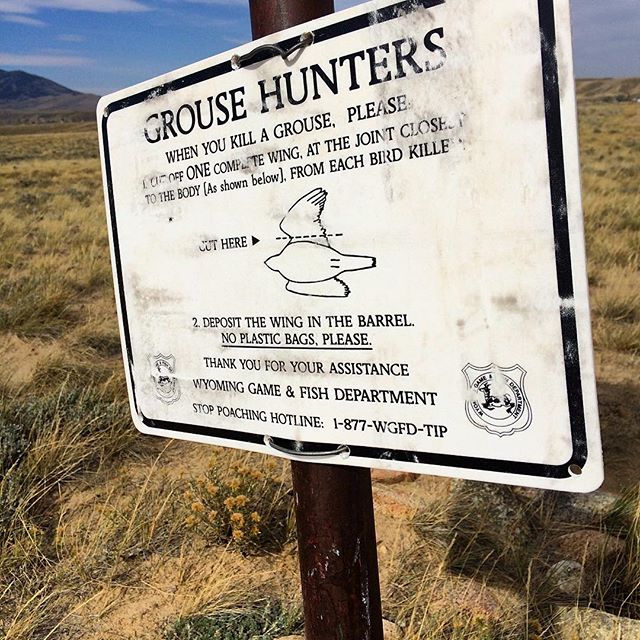 Wings of the Sage

Voluntary wing deposits help shape the future of what is to become of the sage grouse and those that hunt them.

I could see the red barrel far off in the distance as we drove down from the sage flats. The metal spherical container acted like a beacon as we traversed the two-track road. Moments later the truck slowly came to a halt and I jumped out and made my way towards the bed of the truck. I could see the dark tips of the spiny tail feathers protruding from my orange bird vest. The gentle wind swayed each plume. I reached for the vest and immediately felt its heft. The sage grouse is North America’s largest grouse. The bird derives its name, food, and shelter from the sagebrush on which it is so dependent on for its very life.

The fragile ecosystem lingers on desperately just like the sage grouse does, as habitat continues to diminish from its once native range. By some accounts, the sagebrush steppe habitat has declined by 50 percent from its levels just a century ago. As an ardent wingshooter, this plight the sage grouse continues to fight, is always in the back of my mind. Questions such as, what does the future hold for the sage grouse, sagebrush, and bird hunters alike? Are the days I spend in Wyoming mid-September numbered? 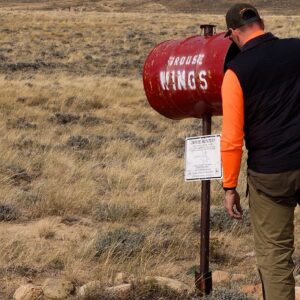 Edgar Castillo places a sage grouse wing into a collection barrel designated by WGFD. Wings collected can help biologists understand the population size and demographics of sage grouse in the collection area.

My thoughts of gloom & doom are whisked away, and I return to the present as the wavering smell of sage engulfs me. The wind carries the powerful fragrance across the pale green landscape. I reach in the gamebag and pull the sage hen out by its feathered leg. Its physical appearance is striking. The large Galliforme bird had a mottled, brownish-gray body, a black “bib” surrounded by white chest feathers, along with a pair of yellow combs over the eyes. Later, while at a Wyoming Game and Fish Department Sage Grouse Checkpoint I would learn the bird was approximately a two-year-old “bomber” based on the measurements of the wings and other identifying male features.

I raised the gray bird and set it on the tailgate. From my pack I retrieved a pair of game shears. I spread the wings out. Its wingspan was impressive. The primary feathers were brown in coloration and the undersides were white. I glanced over at the barrel with the stenciled words “GROUSE WINGS” spray painted in white on both sides. Wyoming Game and Fish biologists have placed marked barrels at various convenient locations scattered about, some near major access roads to popular hunting areas along highways and travel roads. They would act like silent advertisement billboards to hunters to participate in the state’s wing collection program.

Below the barrel was a placard with specific instructions for hunters to follow. I returned my focus to splayed out feathered body and began to remove the right wing by cutting if off at the joint as close to the body as possible. Upon completion I returned the sage grouse to its resting place in my bird vest. With wing in hand, I walked over to the barrel and placed it into the dark opening of the red container and walked away. Immediately I thought “what sort of information would be obtained from MY sage grouse?” I had forgone the decision to keep the magnificent sage fowl and have the bird mounted. Instead, I hoped that my small contribution would illicit some sort of positive feedback and help answer the question as to the fate of the sage grouse.

The number of sage grouse wings submitted depends mainly on the hunters cooperating. Bird hunters who voluntarily deposit wings help biologist obtain valuable information. Wyoming biologists specifically look at the ninth and tenth primary feathers on each wing to determine gender. Shorter feathers can show that the sage grouse was a juvenile, born in the spring. The number of juvenile and female birds in the wing count can give an idea of the sage grouse reproduction success.
Submitted hen feathers tell if there was success in raising a brood. Female sage hens that show signs of finished molting when killed is a good indication the brood was lost, which freed up energy to go into molting. On the other hand, wings that show a slower molting pattern indicate the hen spent the summer raising her brood. Wing data from harvested sage grouse are especially valuable in wet years, where the birds are spread out more across the landscape making it harder to get a good sample on brood sizes. Researchers know that brood success combined with lek count data from specific areas, such as places with recent prescribed burns, has led to areas closed to hunting to help sage grouse populations recover. 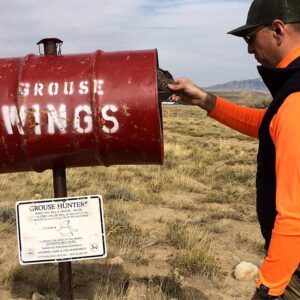 Edgar Castillo places a sage grouse wing from his hunt in a barrel designated from WGFD. The wings collected can give biologists an idea of the health and population variances of sage grouse in the collection area.

Is typically not a good thing to hear, however in this case, it is. The importance of wing collection is vital towards the continued understanding of sage grouse and the surrounding sage landscape. The bird’s literal existence hinders on such retrieved information. Collected wings help form a general idea of population conditions and are crucial, as sage grouse act as a sort of indicator species. Their health and population numbers are suggestive of how other animals who share similar habitats are faring. If sage grouse are doing well, it can be assumed other species are too. You know the saying, “What’s good for the bird is good for the herd.” Hunters benefit as well, as collected data from sage grouse wings help determine populations and set and evaluate hunting seasons and limits. Population gauge aside, dropped off wings act as an informal report card for agencies and assist in providing a forecast to bird hunters.

Data from the collection of wings can be used by biologists to better understand the distribution and the timing of sage grouse harvests in specific areas, the relative proportions of killed birds, and the sex and age structure of populations. Distribution and timing of harvest has relevance to obtaining information pertaining to sage grouse populations and trends, season structure, and to hunter participation for coordinating law enforcement activities.

Collections of sage grouse wings from volunteering hunters is a reasonably low-cost method in obtaining valuable information such as demographic profiles of populations and overall health of the species and correlating habitat in specific areas. Consistency in wing collections is important in comparing harvest and hatch dates, and age and sex rations between areas and years. All this from depositing just a wing.

That is why there is a need to continue educating efforts to increase hunter awareness and participation in depositing wings. These efforts should emphasize the need for hunters to voluntarily drop wings off in identifiable collecting points.

So, if you are a sage grouse hunter and want to do your part, then I recommend in volunteering a wing from each of your birds in the name of science. This holds more emphasis for a bird so intricately connected to the disappearing sage and land, for which the sage grouse walks a fine line of being accessible to hunt for the time being. By committing a wing, sage grouse hunters are in the sense, preserving future hunters the opportunity to continue the hunt these birds of the sage sea.

NOTE. Hunters visiting the Cowboy State can contact the Wyoming Game and Fish Department and obtain information as to whether the area they are hunting is participating in wing collection and the location of drop-off boxes.

Edgar Castillo is a recently retired law enforcement officer for a large Kansas City metropolitan agency. He also served in the United States Marine Corps for twelve years. Edgar’s passion lies in the uplands as he self-documents his travels across public lands throughout Kansas hunting open fields, walking treelines, & bustin’ through plum thickets in search of wild birds. He’s a contributing writer for several publications and e-magazines/websites. He is a member of OWAA – Outdoor Writers Association of America