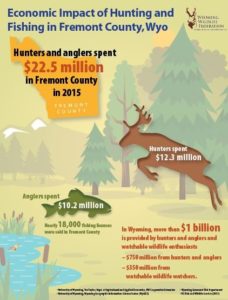 A University of Wyoming (UW) study for Fremont County on the economic impacts of hunting and fishing has revealed a trend politicians and stakeholders are starting to take notice of across the state. Hunters and anglers significantly contribute to the Wyoming economy each year when they take to the field or lakes and streams to participate in their sport.

In 2015, Fremont County spending by hunters and anglers amounted to $22.5 million dollars. Hunters spent an estimated $12.3 million and anglers spent $10.2 million. In addition, a total of 17,769 fishing licenses were sold in Fremont County in 2015.

“Hunting and fishing as economic contributions becomes particularly important during times of economic downturn in the state’s energy sector,” says Tex Taylor, economist with UW’s Department of Agricultural and Applied Economics, author of the report.

The Fremont study is one in a series of economic reports produced by the university for the Wyoming Public Lands Initiative (WPLI) and commissioned by the Wyoming Wildlife Federation (WWF). WWF  presented the study last night at the WPLI Fremont Advisory Committee meeting. This committee, as well as others in the state, have been assembled to craft a recommendation for Wilderness Study Areas (WSA) that fall within their county. Under the WPLI, this county-by-county effort is anticipated to culminate in congressional legislation for WSAs in Wyoming. The Fremont County report and an infographic are available via WWF’s website and clickable map (click here).

“With these studies we hope to inform the debate with good data on the importance of hunting and fishing in the county,” says Jessi Johnson, WWF sportsmen coordinator for the Wyoming Public Lands Initiative. “The stakeholders on this committee will now have knowledge of the millions of dollars injected into Fremont County by hunters and anglers.”

The economic modeling Taylor used for this study and others to come is based on data from the Wyoming Game and Fish Department (G&F) and the U.S. Fish and Wildlife Service (USFWS).  The total $22.5 million in expenditures to Fremont County was based on hunter day estimates from Game & Fish’s 2015 Annual Harvest Reports, compiled by hunt area. UW’s Wyoming Geographic Information Science Center provided the GIS analysis for the study. For the hunting expenditures, the National Survey of Fishing, Hunting, and Wildlife-Associated Recreation (2011) by USFWS includes two expenditure estimates that Taylor adjusted to 2015 dollars: $90.91 per day is spent by residents and $579.82 per day by nonresidents. This amounts to the $12.3 million in 2015 spent by hunters. The data also shows how many days hunters spent in the field. Hunters of big game and trophy game participated in 73,000 hunting days in Fremont County in 2015.

Taylor says, “It is also important to note that dollars that are spent locally generate secondary impacts in various other support sectors within the local economy.”

This is the second economic study in the series. The first study completed by UW was for Park County, which revealed more than $23.4 million was generated in 2015 as a result of hunters and anglers participating in their outdoor activities on public and private lands in that county.

These studies will include the other participating counties under the WPLI, as commissioned by WWF and with the support of the Wyoming Sportsmen’s Alliance, eight groups representing more than 30,000 hunters and anglers. Please see the WWF website for information on the participating counties, at www.wyomingwildlife.org.

“These UW economic studies show that hunting and fishing are not only important sports for our way of life in Wyoming, they also help prop up the economy,” Johnson says.