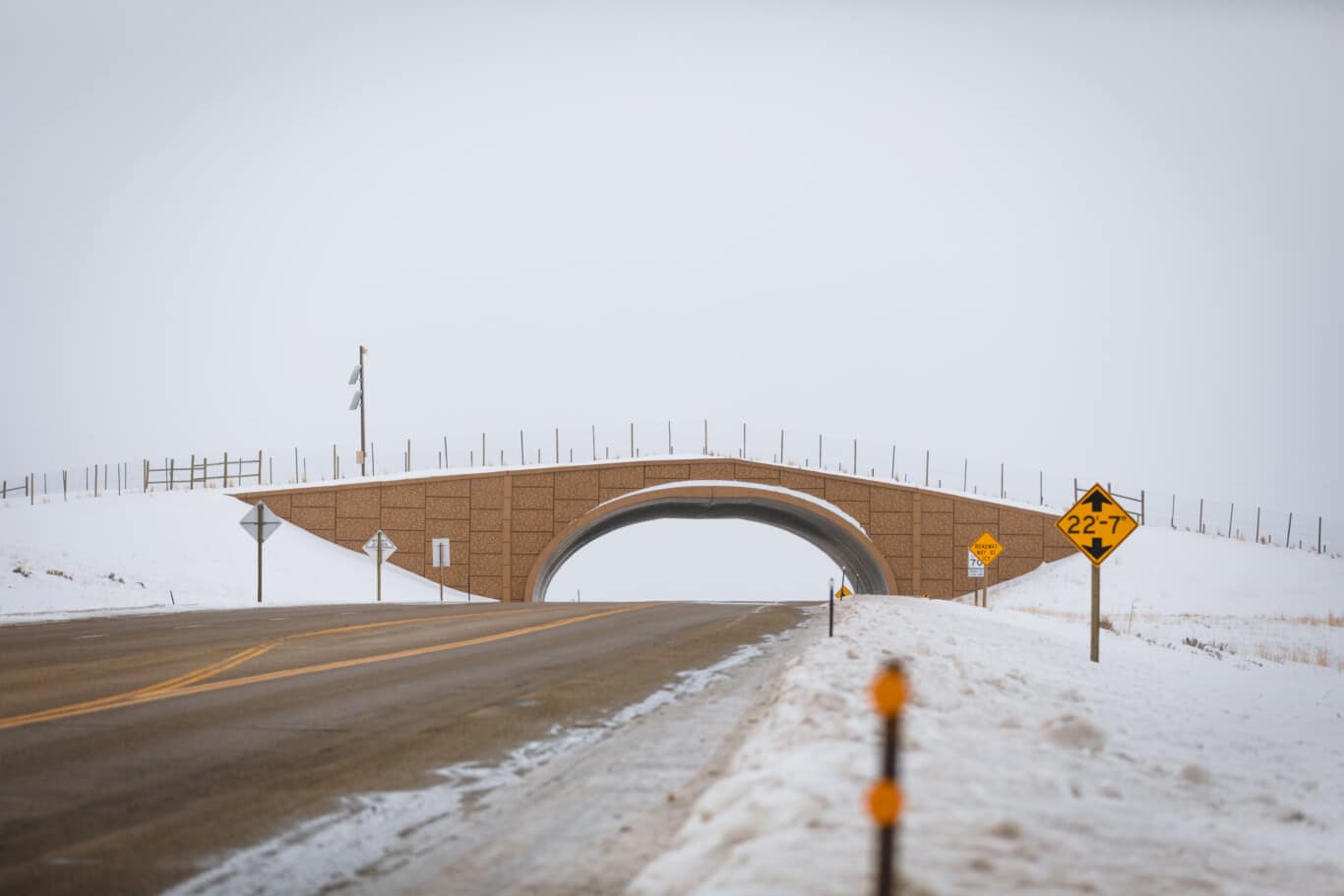 Originally identified by the Wyoming Wildlife and Roadways Initiative Implementation Team (WWRIIT), there are 240 sites that are both important and may require more involved and costly solutions, like tall fencing to use existing underpass structures, and overpass structures like the ones at Dry Piney. Using the best available data and expert knowledge, the Team identified a smaller group of 40 sites. Within those 40 are 10 high-priority areas where wildlife values and roadway safety are most crucial. These 10 areas are zones where the Federation and other partners are working hard to fund improvements to wildlife crossings and reductions in collisions. 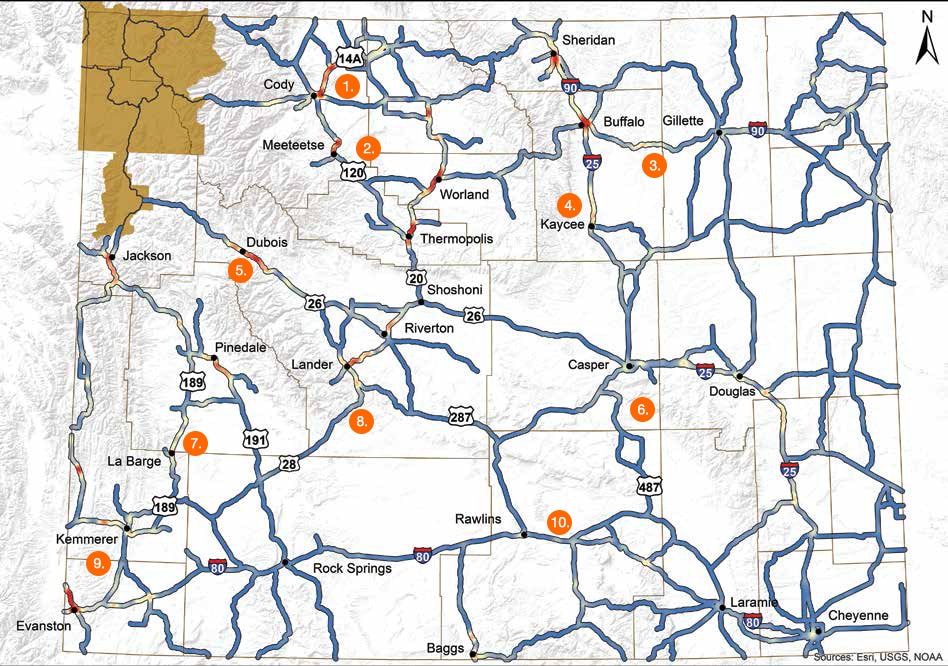 The above map shows hotspot areas for wildlife collisions around the state of Wyoming. Created by Corrina Riginos of The Nature Conservancy in partnership with the Wyoming Department of Transportation.

There is a riparian corridor associated with Sage Creek that serves as a natural passage for deer. Traffic volumes are high with peaks at dawn and dusk with deer-vehicle crashes mostly seasonal and occurring with a peak in fall during the rut. The project would construct high barrier fence to funnel mule deer to an existing bridge over Sage Creek where they can cross safely and is one of the least expensive crossings projects estimated at $1M.

Elk, deer, and pronghorn all get hit by vehicles in this section as this area serves as a partial barrier. Elk-vehicle collisions are particularly dangerous and costly. Recently, WYDOT has installed dynamic message signs to warn drivers and will improve right-of-way fence modifications. The long-term solution is to install two (2) overpasses and eight (8) underpasses (box culverts or bridges) and high fencing to funnel animals toward crossing structures with total costs at $19-25M.

• Average of 60 deer collisions on this stretch every year

This section of I-90 experiences high numbers of wildlife-vehicle collisions primarily involving mule deer as they negotiate crossing the roadway. The area serves as yearlong range for this species but they do try and move north and south as weather and range conditions change. The roadway serves as a partial barrier to these movements. Though less-expensive short-term solutions are being worked on, the long-term crossings solutions are estimated at $30-37M.

• Average of 53 animals hit on this stretch every year 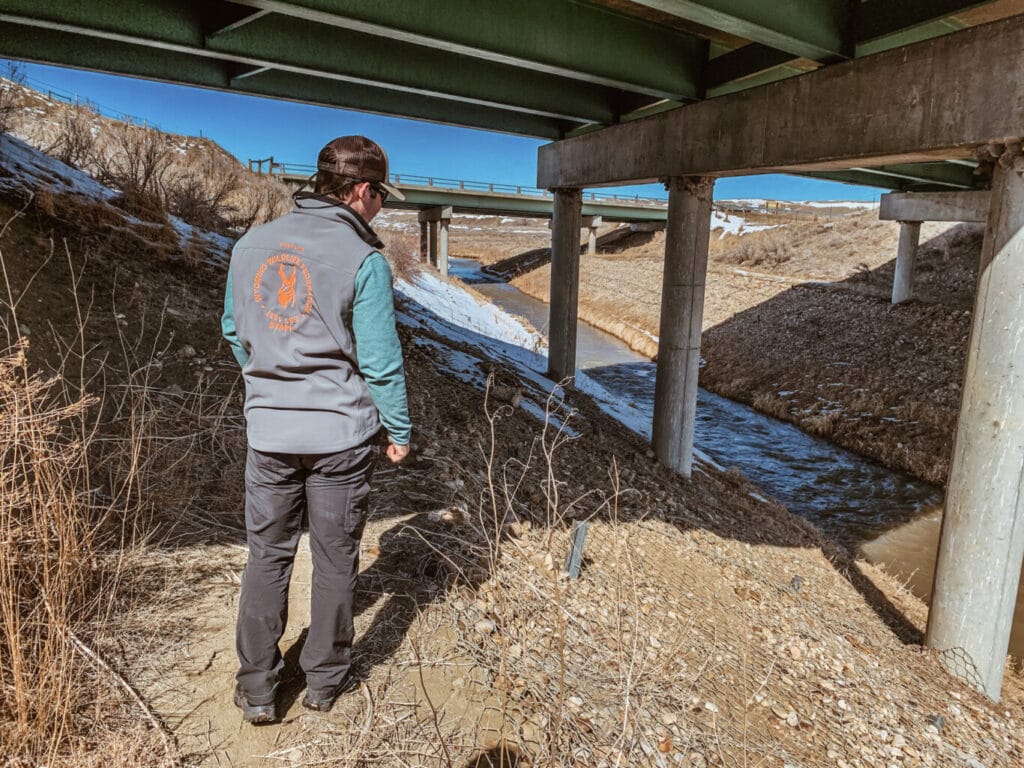 WWF’s Communications Director, Jaden Bales surveys an existing underpass structure between Kaycee and Buffalo. Structures like these will be used to funnel wildlife under busy roadways, like I-25 above. Photo by Jessi Johnson

Originally estimated at $2M, this high-priority project now has a price tag of $3.8M that was funded in early 2022. This project stretches from mileposts 255-270 and boasts the second-highest rate of collisions with deer on a Wyoming interstate. The interstate currently limits the safe movement of mule deer and whitetail deer seeking additional habitat along creeks and deep sagebrush cuts. This project will utilize exclusionary fencing to funnel wildlife to six existing crossing structures, such as underpasses, bridges and culverts. Furthermore, the workers will also add deer ramps, gates, and cattle guards, as needed. The Kaycee to Buffalo project broke ground in the spring of 2022.

Currently, For more information about this specific project, contact Chris McBarnes of the Wyldlife Fund at chris@thewyldlifefund.org.

Annually, an average of 136 collisions with mule deer occur on this stretch of highway, costing $746,000 per year. Also, the bighorn sheep population along this stretch of highway is not doing well. While the primary causes are disease, the sheep hit along the side of the road here surely do not help the situation, either. WYDOT, as well as Game and Fish, and various wildlife and community groups, hope to reduce those collisions as well as impacts to other wildlife, such as bighorn sheep. These entities are taking action to find solutions that give wildlife the green light for safe passage along this 25-mile stretch of U.S. 26/287, from east to west outside of Dubois.

The Wildlife Migration Mitigation Strategy was completed in early 2022 and presented to the public with a projected final cost of around $21-26M. Though funding is still being secured, the 30×30 Conservation Program and funding efforts of NGO’s, like the Wyoming Wildlife Federation, have a clear path forward to share with public, legislative bodies, and other entities who are involved in supporting these projects.

• Collisions known to be under-reported

This section of WY-487 experiences high numbers of animal-vehicle collisions involving mule deer and pronghorn as they negotiate crossing the roadway. Given the relatively low traffic volumes, there is a high per-vehicle risk of a collision, and collisions are known to be under-reported. This stretch of highway impacts a Wyoming Game and Fish Department priority mule deer herd. The suspected issue of cause is primarily related to visibility as it is difficult for motorists to see animals in this section of roadway. Right-of-way (ROW) fence and vegetation modifications such as frequent mowing of the ROW or replanting the ROW to a low height grass-only composition, eliminating sagebrush and other shrubs. Another option would include the placement of dynamic messaging signs to warn motorists. Reducing nighttime speed limits may also be effective at reducing collisions. Long-term construction solutions are estimated to be $14.5-17M.

• Moose also frequently hit on this section of highway

The Dry Piney wildlife crossing project received the Better Utilizing Investments to Leverage Development (BUILD) grant for $14.5M in 2019 to help fund the myriad of crossings work that are needed there. In addition to the $14.5 million BUILD grant, the Wyoming Transportation Commission and the Wyoming Game and Fish Commission both contributed $1.25 million for a total of $2.5 million toward the Dry Piney project, plus there are a whole cadre of other supports of the project. The funds are being used for underpasses, fencing and related improvements along a 19-mile stretch of US 189 between La Barge and Big Piney. The total project costs are estimated over $36M. 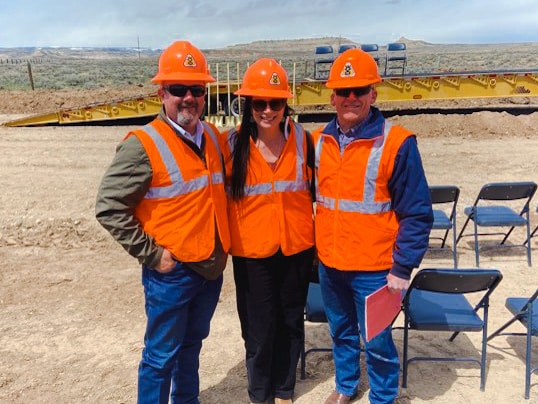 Workers broke ground on the Dry Piney crossings in early May 2022. At the end of this project, there will be nine wildlife passages underneath Highway 189 and 16 miles of tall fences lining both sides of the road.

• Pronghorn migration is impaired by fencing 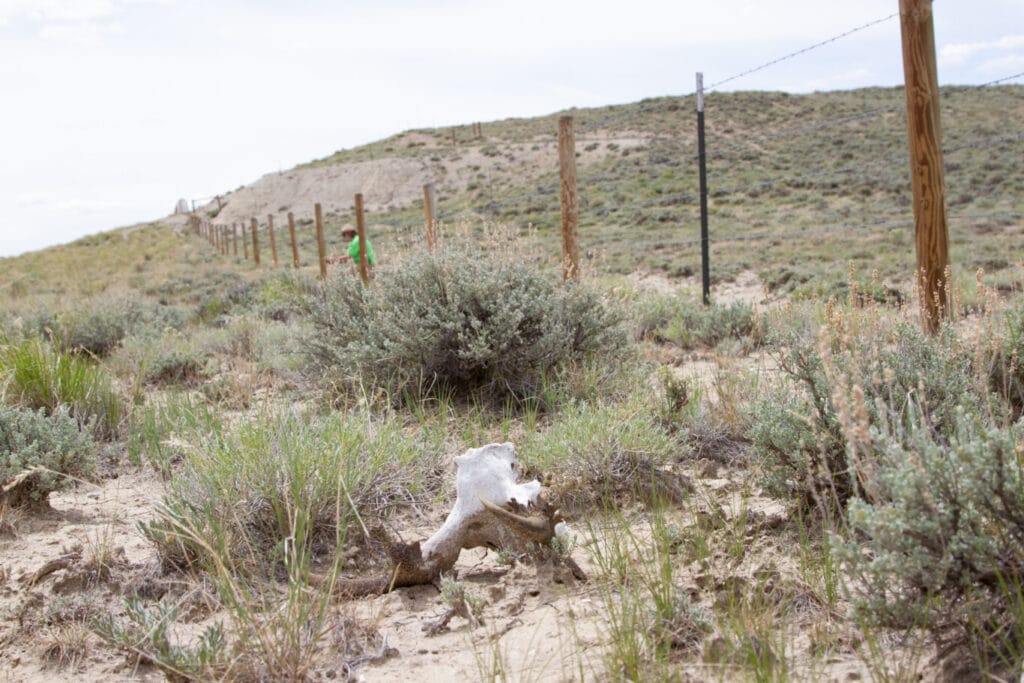 This antelope skull was found between the highway right-of-way on the 2020 Farson fencing project the Federation partnered in a few miles southwest of the Sweetwater priority crossings area.

The Sweetwater section of the highway is a particular challenge for those animals traveling along the Red Desert to Hoback mule deer migration and sees an increase in accidents during spring and fall migrations. Improving the passage in this area from one side of the road to the other would lead to better movements across the landscape for thousands of deer each year. In 2020, the Federation worked on a fencing project along Highway 28 to improve pronghorn passage under the bottom wire of the right-of-way fencing here. Construction of wildlife crossings and fence are estimated at $10M to $14M.

This part of the highway is a major impediment for both resident deer and pronghorn populations and is a heightened area of accidents during migratory periods of the year. It’s also a major highway for oil and gas operators who live in Kemmerer and Evanston. As a result, there are high incidents of animals getting hit during corpuscular times of day when both workers are moving to and from work. The project would construct four (4) overpasses and 10 underpasses (box culverts or bridges) and high barrier fences to funnel mule deer and pronghorn to the crossing structures with estimated costs at $31M-41M.

This area of I-80 serves as a barrier to mule deer and elk movement. The area is believed to be conducive to connecting habitats on both sides of I-80 to enable north-south movements of mule deer and elk that historically would have crossed. This project would construct three (3) overpass structures which spans the lanes of I-80 with high fence to funnel animals to the overpass structures with total project costs estimated to be $27M.

Funding for the Halleck Ridge project is still needed and is a high-priority for the Wyoming Wildlife Federation’s efforts during legislative work, community engagement, and policy conversations.

If you want to use your voice for more and better wildlife crossings in Wyoming, please become a member here >>