Our Comments to WGF on Captive Rearing of Sage Grouse 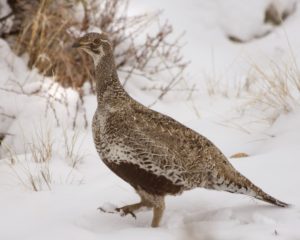 Last year the Wyoming State Legislature voted to approve House Bill 271.  This bill required the Wyoming Game and Fish Department (WGF) to write rules to allow for captive farming of Greater sage grouse. You can read the bill in its entirety here. You can learn more about the sponsors of the bill here.

Since last legislative session WGF has written rules and taken public comment.  Below you will find our comments.  The WGF Commission will vote to approve final rules on Aug 23 meeting in Casper. More here.

On behalf of the undersigned organizations, who represent a large portion of American sportsmen and women and have worked for years to ensure the greater sage-grouse (herein referred to as sage-grouse or grouse) does not w6arrant a listing under the Endangered Species Act (ESA), we are writing in regard to the 12 May 2017 Chapter 40 draft Regulations Governing Commercial Game Bird Farms and Chapter 60 draft Regulations Governing Greater Sage-Grouse Game Bird Farms.   We echo Governor Mead’s concerns about provisions in this new law regarding disease control, genetic diversity, survivability of released birds, and timing, location and method of egg collection expressed in a letter on March 14, 2017 to Wyoming Secretary of State Edward Murray.   We respectfully submit the following comments to the Commission:

We support the full authority of the WYGF to manage all aspects of sage-grouse egg collection, propagation, and release of birds.   Our support for extensive WYGF oversite stems from previous attempts to restore grouse populations into vacant wild habitat through release of captive-reared birds that have had almost no success in reestablishing  wild populations (the only example with Attwater’s prairie chickens has failed to sustain population due to zero recruitment from pen-raised birds released into the wild; Lockwood et al. 2005) and brood augmentation that only has been demonstrated under specific research settings (Apa and Wiechman 2015, 2016, Thompson et al. 2015).   In fact, the only documented success of brood augmentation comes from Colorado, where 1-5 day-old Gunnison sage-grouse chicks were released into existing broods of radio-marked hens (Apa and Wiechman 2015, 2016, Thompson et al. 2015). Importantly, the Western Associations of Fish and Wildlife Agencies (WAFWA 2017) noted that this will not likely to be a strategy that could be scaled up from research settings to operations covering larger populations. Additionally, no large-scale, programmatic captive breeding efforts such as that allowed by current Wyoming law have ever been attempted for sage-grouse, thus warranting strict oversite by WYGF.

Additionally, we are adamant that releasing captive-reared birds into areas without the necessary habitat to support them clearly has little chance of accomplishing anything useful relative to conservation of sage-grouse populations.  No scientific information is available to suggest that stocking captive-reared greater sage-grouse has any chance of accomplishing anything useful for sage-grouse populations. Indeed, (WAFWA) recently stated that “augmentations are unlikely to have any success in small and isolated populations until and unless the environmental conditions that precipitated sage-grouse declines have been mitigated” (WAFWA 2017). Thompson et al. (2015) also noted that any brood augmentation program must be done in conjunction with other habitat and population management efforts to address root causes of population decline and vulnerability.

We also are unaware of any scientific information regarding whether disturbing sage-grouse nests and removing their eggs over an unspecified area will cause greater reduction in sage-grouse populations than any augmentation could possibly counter.  Indeed, as WAFWA (2017) point out, given the relatively low hatchability and survival rates of sage-grouse in captivity, we feel that egg collections from wild clutches could be substantial to produce a sizable captive flock for captive egg production and could have negative impacts on wild populations.

There also is a complete lack of scientific information on a specific time frame for successfully returning captive-reared sage grouse chicks back to the wild except for the work of Apa and Wiechman et al. (2015, 2016) and Thompson et al. (2015), who released 1-5 day old chicks into existing broods of marked hens. There are virtually no data on survivorship of captive-reared chicks simply dumped out into the landscape beyond 5-days of age and/or without the presence of existing broods. As such, most if not all such releases past 5 days of age and not into existing broods should be expected to die.

Without strict scientific oversight of sage-grouse game bird farms in Wyoming by WYGF biologists, we believe there is little probability that there will be any reasonable or viable benefits from such operations. All available science, coupled with the expert opinion of sage-grouse researchers, leads us to believe releasing older captive-reared birds is doomed to fail. Thus, to justify the disturbance on wild populations and impact of egg collection, the Commission should clearly define the conditions that must be met for release of captive-reared birds into the wild.  We suggest only successful scenarios described in the literature be used for any releases (e.g., Apa and Wiechman 2015, 2016, Thompson et al. 2015), and offer further suggestions below.

We believe that sage-grouse game-farm owners and operators should support strict regulations and protocols that ensure grouse held in captivity have the best chance of survival. To ensure the highest likelihood of survival, we recommend that captive-propagation facilities with eggs collected from wild sage-grouse should be authorized only under the following requirements:

We believe that sage-grouse game-farm owners and operators should support strict regulations and protocols that ensure sage-grouse held in captivity retain as much of their natural instincts as possible so they have the best chance of survival when reintroduced into the wild. To ensure that this has a high likelihood of occurring, we recommend that captive-propagation facilities with collected sage-grouse eggs should be authorized only under the proposed requirement by WGF.

Although Section 8 of the draft regulations (Chapter 60) does not specify where eggs may or may not be collected, we believe methods approved to collect wild sage-grouse eggs by WYGF must be as restrictive and regulated as possible to limit hen, nest, and brood disturbances during the reproductive period.  Sage-grouse are determinate layers, meaning each individual female will contribute only about 7-10 eggs per year.  Thus, contrary to what some have said publically, sage grouse rarely re-nest and are sensitive and vulnerable to disturbance. Therefore, we recommend that provisions developed for sage-grouse game bird farms should prohibit egg collections:

Additionally, we recommend that a fee be charged for all collection permits and be large enough to cover all costs and expenses associated with administrative tasks associated with issuing the permit. A permit should be required, to be carried at all times, by any permitted collector and have identification information including a recent photograph of the approved collector. A WYGF biologist should also pre-approve all collection agencies, be onsite during egg collection activities, and immediately inspect all eggs collected. These costs incurred by WYGF should also be covered by permittee and/or bird farm which will receive eggs.

We believe that sage-grouse game-farm owners and operators should support strict regulations and protocols that ensure sage-grouse held in captivity retain as much of their natural instincts as possible so they have the best chance of survival when reintroduced into the wild. We only support using proven release techniques defined by Apa and Weichman (2015, 2016) and Thompson et al. (2015), but should the State of Wyoming allow release of older birds into the wild, we suggest the following recommendations:

Additionally, we believe all releases of pen-raised sage-grouse, notably those >5 days and not into existing broods, should be done so in a research context to elucidate survivorship of older released birds to determine their productivity (see Lockwood et al. 2005 regarding no recruitment and failure of releases of Attwater’s prairie chickens). The permittee should be responsible for funding this research and all information must be collected in partnership with WYGF. The research should be published in the scientific literature and made available to the public. Once the science indicates acceptable survivorship and productivity of captive reared birds in a research setting, then scaling up to broader scale operations could be considered. Without such a rigorous program to evaluate effectiveness, we are deeply concerned wild populations will ultimately be negatively impacted from flawed attempts to release birds and simply manage to numbers of sage-grouse.

We strongly oppose the use of captive-reared sage-grouse as a form of mitigation or compensation for any impacts associated with habitat loss, fragmentation, and degradation from authorized actions by the State of Wyoming or a Federal Agency.  Finally, we recommend that the WYGF conduct an annual review of any program or action stemming from implementation of this law and release findings within 60 days of the end of the year and before the subsequent egg collection season begins.

Thank you very much for the work that the WYGF Team has been doing, and a special thanks to staffs that have done the heavy lifting to help keep this species off of the Endangered Species List.  We hope that the Department will continue to use common sense and sound science to provide guidance and oversight for the health of sage-grouse populations, in implementing solutions to the problems causing sage-grouse declines, and encouraging public policies and management decisions that will enhance important habitats and sage-grouse populations. Please do not hesitate to contact one or more of our organizations if you have any questions or request our assistance.

Apa, A. D., and L. A. Wiechman. 2015. Captive-rearing of Gunnison sage-grouse from egg collection to

adulthood to foster proactive conservation and recovery of a conservation-reliant species. Zoo Biology 34:438-452.

Populations through Captive Breeding and other Means. http://www.wafwa.org/initiatives/sagebrush_ecosystem_initiative/