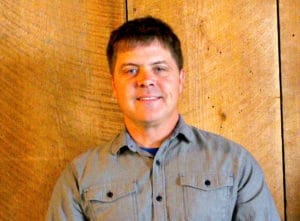 Dwayne Meadows has been named the new Executive Director of the Wyoming Wildlife Federation (WWF), the oldest sportsmen and conservation advocacy group in Wyoming.

He takes charge May 8th of the 80-year old organization committed to conserving wildlife, habitat and outdoor opportunities in Wyoming.

“Dwayne is well known in the conservation and sportsmen world and is a seasoned wildlife professional,” said Shane Cross, WWF Board president. A native of Wyoming, Dwayne has dedicated his life to working for fish and wildlife. From his childhood in Saratoga, to organizing sportsmen for public lands to his recent work advocating for fisheries, Dwayne has shown passion and leadership necessary to lead Wyoming’s oldest sportsmen and conservation group.

Meadows brings extensive experience to WWF with a range of skills, from guiding conservation programs to stakeholder engagement, board relations to budget management. For more than 10 years he has worked in wildlife public policy and grassroots organizing. Most recently he served as Pacific Northwest Coordinator for Wild Steelheaders United, under Trout Unlimited.

“I have made a life of working in conservation and outdoor recreation,” said Meadows. “It started with driving river shuttles at age 16, and then guiding trips on the North Platte, which lead me to conservation. My career has focused on organizing people on the land around local wildlife and fisheries conservation issues.

Meadows also worked as a political consultant with an emphasis on sustainable resources as well as for the National Wildlife Federation as a public lands organizer, with much of his focus on Wyoming. He is a graduate of the University of Wyoming with a masters degree in American Studies and Natural Resources.

“Dwayne has a strong conservation ethic, demonstrated by his involvement in sportsmen campaigns for steelhead and for public lands advocacy work in the West,” Cross said. “We are proud that he chose to come home to lead the Wyoming Wildlife Federation into the future.”

“Coming home to Wyoming and having an opportunity to lead WWF is an honor. I look forward to working with all sportsmen and women to continue Wyoming’s legacy as one of the greatest places to hunt, fish and recreate in the West,” Meadows said.