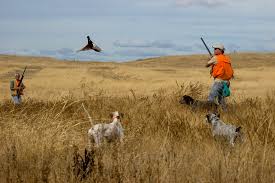 Commissioned by the Wyoming Wildlife Federation (WWF), Tex Taylor and Tom Foulke, economists with UW’s Department of Agricultural and Applied Economics, conducted the study. “The popularity of hunting and fishing by residents and nonresidents indicates that these recreational activities are important both in terms their contributions to the local economy and for their contributions to the residents’ quality of life,” says Taylor, co-author of the report.

The Carbon County study is one in a series of economic reports produced by UW for the Wyoming Public Lands Initiative (WPLI). WWF Public Lands Coordinator Jessi Johnson introduced the study today at the WPLI Carbon Advisory Committee meeting. “With these studies we hope to inform the debate with good data on the importance of hunting and fishing in the county,” Johnson says.

This committee and other county processes have been assembled to craft recommendations for Wilderness Study Areas (WSA) that fall within each county participating in the WPLI. The initiative is anticipated to culminate in congressional legislation for WSAs in Wyoming. The Carbon County report and other UW studies are available via WWF’s  website and clickable map.

The economic model Taylor and Foulke used for this study is based on data from the Wyoming Game and Fish Department and the U.S. Fish and Wildlife Service (USFWS).  The total $19.9 million in hunting expenditures in Carbon County was based on hunter day estimates from Game and Fish’s 2015 Annual Harvest Reports, compiled by hunt area.

The hunting expenditures portion of the economic model was based on the USFWS National Survey of Fishing, Hunting, and Wildlife-Associated Recreation (2011), and included two expenditure estimates that Taylor adjusted to 2015 dollars: $90.91 per day is spent by residents and $579.82 per day by nonresidents. This amounted to the $19.9 million in 2015 spent by both resident and nonresident hunters in Carbon County.

“It is important to note that the dollars that are spent locally generate secondary impacts in various other support sectors within the local economy, such as utilities, business services, and employee household expenditures,” Taylor says.