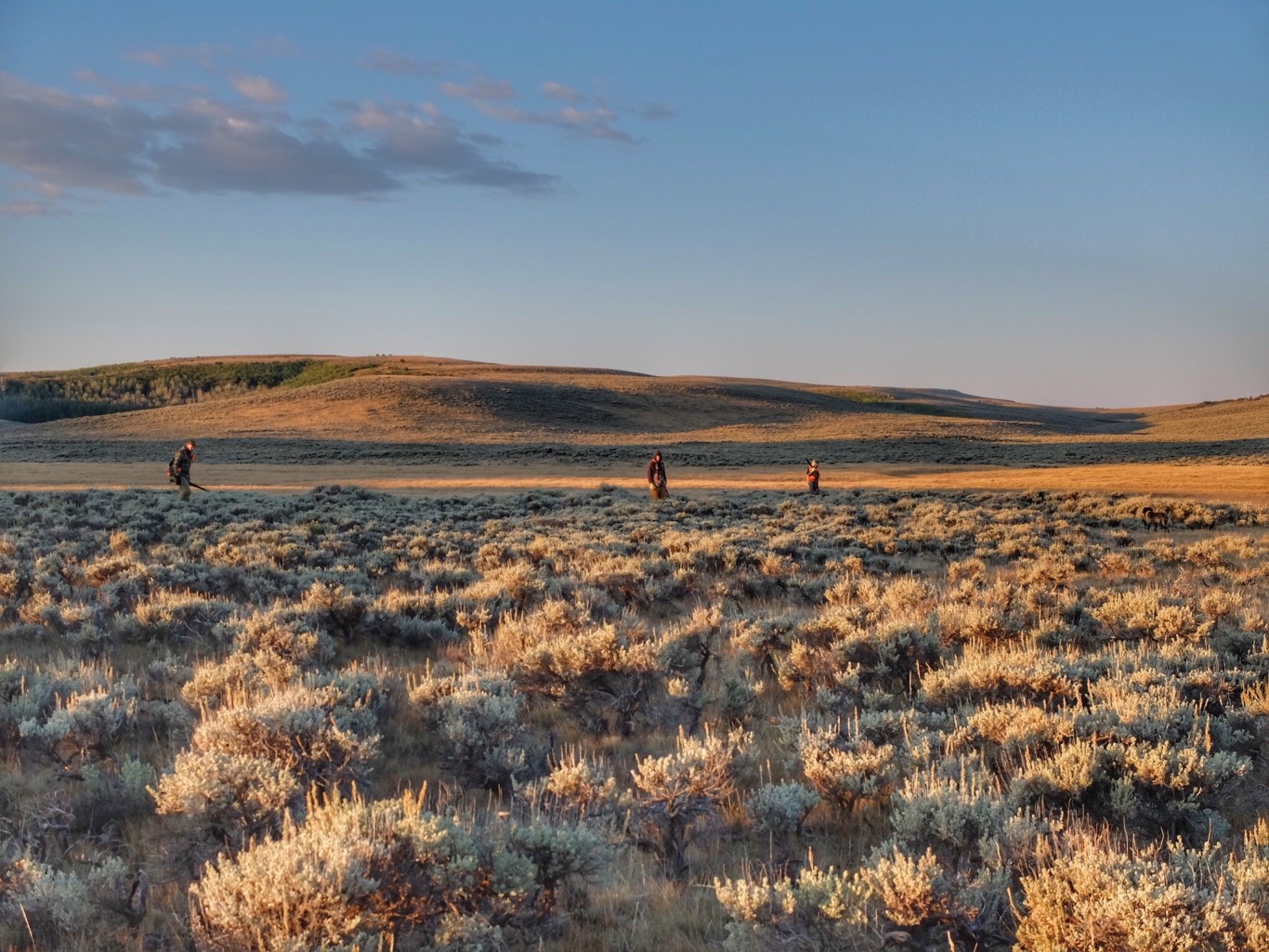 What Sage Grouse Taught Me

I knew almost nothing about the largest of America’s grouse except hunting them was not going to be an easy undertaking. When the idea was formulated among our group of five that we were going to be trekking across the country from Kansas to Wyoming to hunt sage grouse, I knew it was going to be a daunting task and there were going to be lessons learned on many levels. The sage grouse is a bird of controversy and with it comes obstacles. Obstacles that can be overcome.

Our hunting party had been forewarned that sage grouse, though plentiful within the Bureau of Land Management lands we would be hunting, could lend itself to be more difficult than anticipated. Our foe would be the extensive sage flat that stretched for miles. As far as the eye could see. The land was expansive, to say the least. Nothing we Kansas wing shooters had ever experienced.

Research and tips from those wanting to be helpful directed us to checkout and hunt the waterholes, short sage in the early morning and late afternoon hours, and tall sage during the midday – didn’t ring true. With no experience hunting that type of habitat, we quickly discovered the landscape was indistinguishable. The sage grouse were out there. We just had to find them. Our tactic was to cover ground. Lots of it. Our enthusiasm never withered with each step amongst the sage. We pressed on each day. It turned out the area we were hunting had been subjected to a rather lengthy dry spell. Unfortunately for us, prior to arriving, much needed rains quenched the thirst of the high desert. This caused the sage grouse to disperse and not rely on known watering holes. Thus pushing our hunting party out from the spring and surrounding area we were going to hunt and forcing us to walk the sage flats in search of grouse. 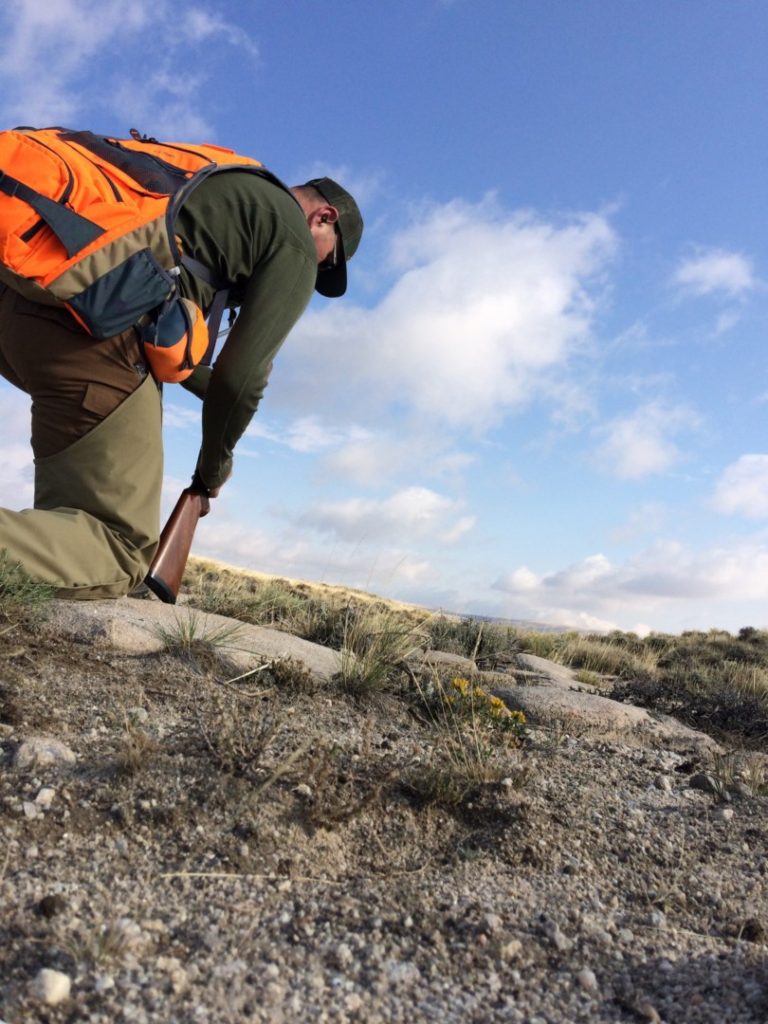 When birds were found, the grouse of the sage were not as dimwitted as we thought. Our party discovered sage grouse would magically morph and become part of the sagebrush and landscape. Their slow flight played havoc with our string of shot connecting. They were akin to B-52 bombers taking off the ground and then sailing off into the grey vegetative sea and disappearing.

When we did get it right, the scenario played out perfectly…suddenly a handful of turkey poult-sized birds took to the air. The shotgun swung and a volley of shots rang out. The giant grouse had been hit. The bird sailed off into the sage ocean, until it fell amongst a clump of sagebrush. With the bird marked, I raced towards it. Macy, the Drahthaar quickly located the bird and brought it to me – a large, heavy adult. The sage grouse sported a grayish head, dark brown throat and a white breast. Its main body speckled with brown and gray feather colorations. The massive wings underneath were white. Instantly, I envisioned the magnificent sage grouse mounted, placed next to my first pheasant I ever shot. A question was posed immediately in my mind. Do I mount the bird for display, or do my part in making sure the sage grouse has a place in my hunting future? 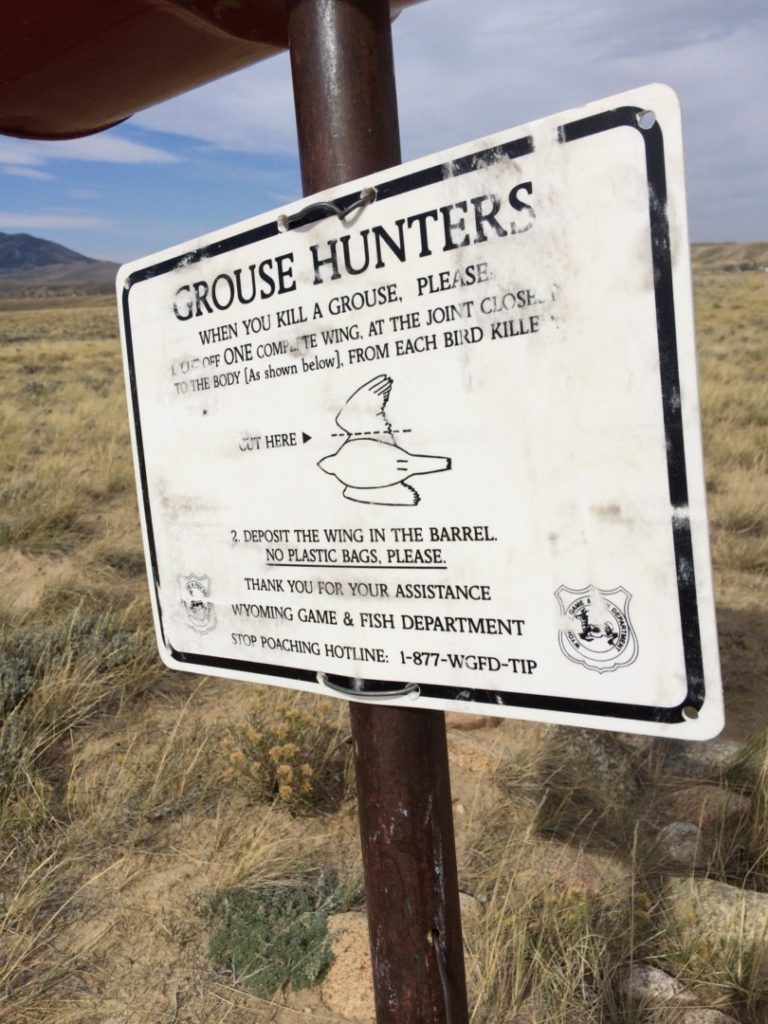 Prior to embarking on the trip, I had read extensively about the plight of the sage grouse. There were many things, being discussed to help the iconic bird of the west. The Wyoming Game and Fish Department were urging grouse hunters to drop one wing from any birds harvested. Sage grouse wings were to be placed into specially marked wing barrels which had been set up in various locations in the field.

Information derived from hunters who volunteered wings from such a treasured upland bird would be a valuable piece of the puzzle to ensure sage grouse would continue to live among the precious sage ecosystem as well as continuing a sustainable population suitable to allow hunting. From the deposited wings, biologists would be able to tell the age and sex of harvested birds. Other population data such as determining whether adult female sage grouse successfully hatched and raised a brood of chicks, would be obtained from the study of the wings. 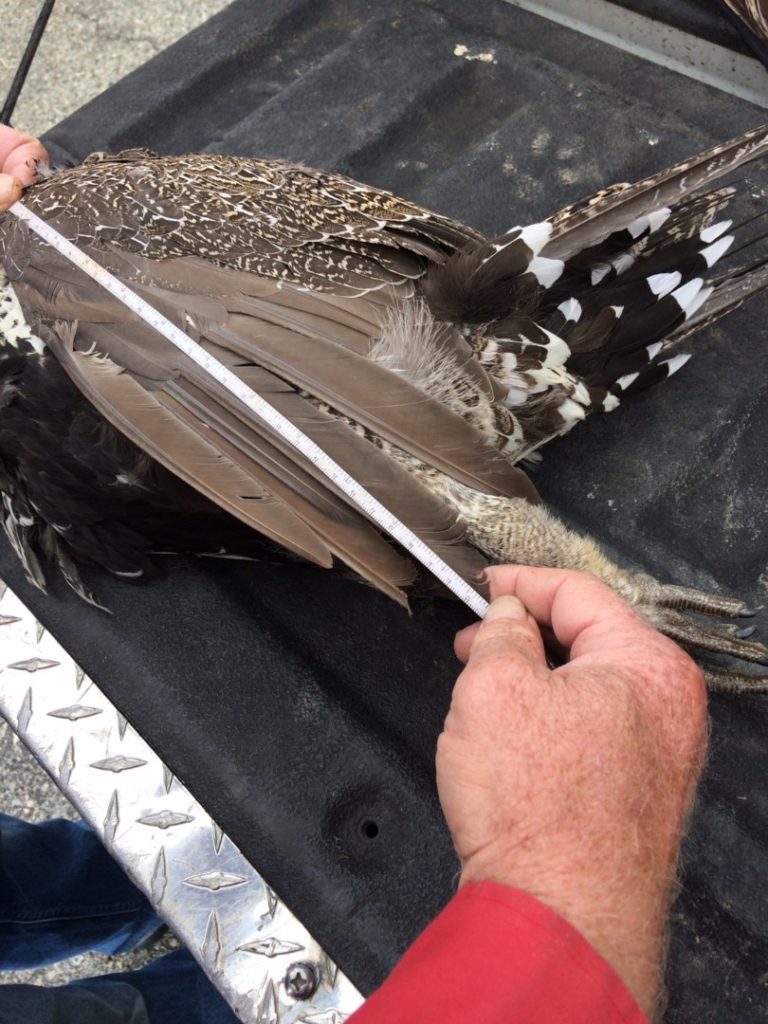 The truck was slowing…a Wyoming Game and Fish Department Grouse Checkpoint lay ahead. We stopped. Licenses were checked and when asked if we had any sage grouse to declare, we said “Yes.”. The game warden asked where we had hunted as well as offering some tips and locations for our next day of hunting. He examined two birds. Mine, he said was a mature two-year-old male ‘Bomber”. Each bird inspected. Measurements taken and logged. He immediately noticed a wing missing from each bird and thanked us for our contribution in helping the sage grouse’s plight. We had dropped off two wings at the first “wing barrel” we had come across near the bottom of a series of mountains.

Symbol of the West

The earliest indicator of the significance of the grouse on the landscape is evinced by the wide recognition afforded the bird in Native American languages. Many tribes utilized the sage-grouse for food and emulated the grouse in ceremonial dress and dance. The names they gave to sage-grouse are many and diverse, including “Seedskadee,” “Ooˊ-jah” and “See-yook” to name but a few.

The greater sage grouse’s natural range once encompassed over 297 million acres scattered across 13 western states. Virtually anywhere sagebrush grew, there were sage grouse. In the last century, sage grouse population have plummeted. The bird is dependent on sagebrush for its very survival. From deriving its diet and nutrition, to using it for shelter and nesting. 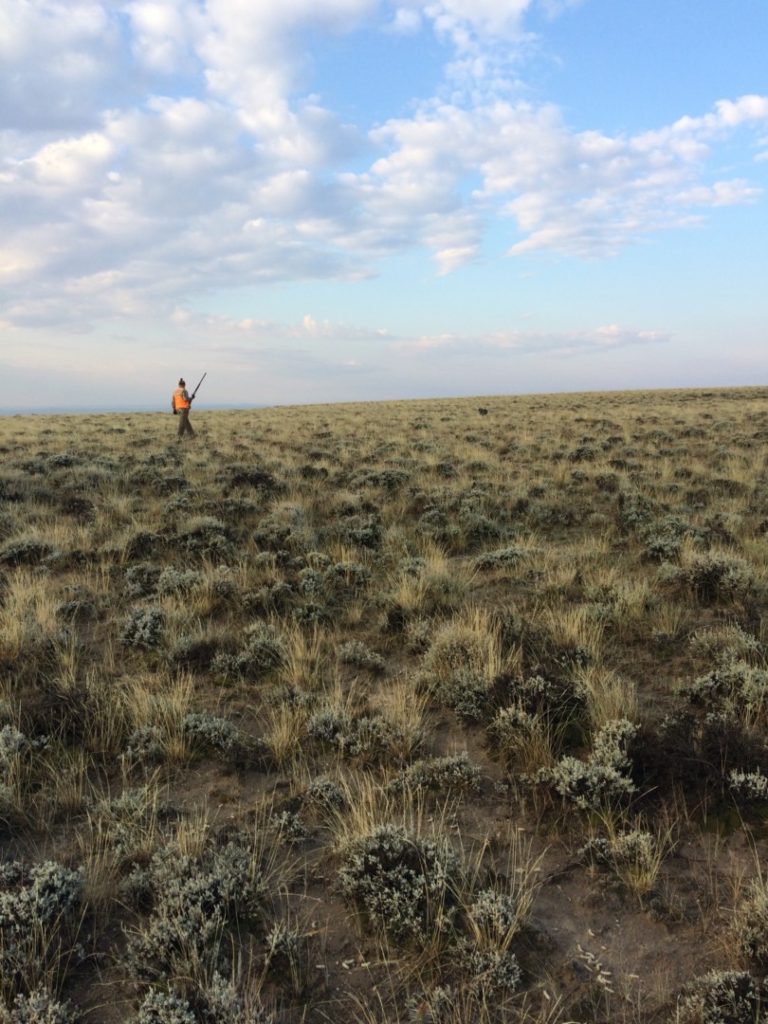 They have replaced the bison of yesteryear as the symbol of the west, to becoming our winged buffalo of the sage for our generation. As the sagebrush disappears, so does the eponymous fowl of the sage. While there is hope for the sage grouse if current conservation initiatives continue, the fact that there’s little chance for the next generation of upland bird hunters will know what it’s like to have their dogs range far into the greyish sage sea and point a sage grouse, let alone feel the heft of such a beautiful bird in their bird vest.